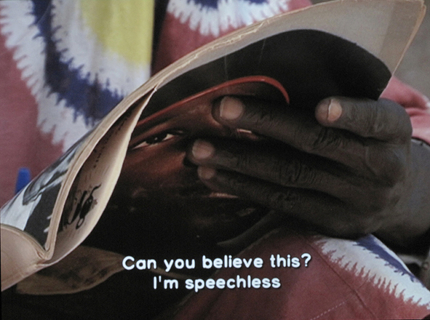 Vita Nova is the original title of a novel by Roland Barthes that only exists in the form of preparatory notes. The book was never realised. Vincent Meessen takes the title of this 'future work' and, through lack of substance, adopts the dividing line between criticism and narrative. Pretending to be a documentary essay, Vita Nova questions realism as a story-discourse where mythology never ceases to torment the documentary’s will towards truthfulness. A cover of Paris Match from 1955, known from Barthes' Mythologies (1957), shows a cadet who salutes the French flag. In Vita Nova, this notorious icon of postcolonial criticism becomes an archive loaded with hidden meaning.

In his famous essay Mythologies, Roland Barthes demystified the French colonial imperialism by means of a photograph that appeared on the cover of Paris Match. The picture became an icon of modern criticism. Vita Nova unveils the biographical ghost underneath the surface of this mythical picture. When recited, Barthes words slowly reveal their hidden meaning: the unmeasurable weight of a historically burdened heritage.

Every time a history gets told, it breathes new life into the events and those involved. A new point of view can shed new light on everything. Take, for example, the African child soldier saluting the French flag on the Paris Match photo, completely awestruck by the flag that was the very symbol of the repressor. In Mythologies, Roland Barthes writes that the photo says nothing about the little boy himself, but conveys a self-evident colonial message of devotion to the great French Empire. In Vita nova, Vincent Meessen rereads this analysis. He visits the little boy from the picture and finds an old African who has forgotten almost all of the French national anthem. It's a touching scene, one that places the photo in a contemporary, post-colonial perspective without any explanation. With his critical outlook, surprising historical research, and sharp selection of the material, Meessen brings into question the intellectual and political values of an entire generation of students who were raised on Roland Barthes's analyses of hidden meaning in popular media images. Barthes turns out to have been family (on the sly, no less) of the important Captain Louis-Gustave Binger, who "gave" Côte d'Ivoire to France. Was a vicarious feeling of guilt the inspiration for his anti-colonial texts?

Hantises, the third Koltès Biennale at FRAC Lorraine in Metz (2016)

Memory Politics, a video programme at the Telemark Art Center in Skien, Norway (2015)

Vita Nova (2009), screening followed by a discussion at at Universidad Complutense Madrid (2013)