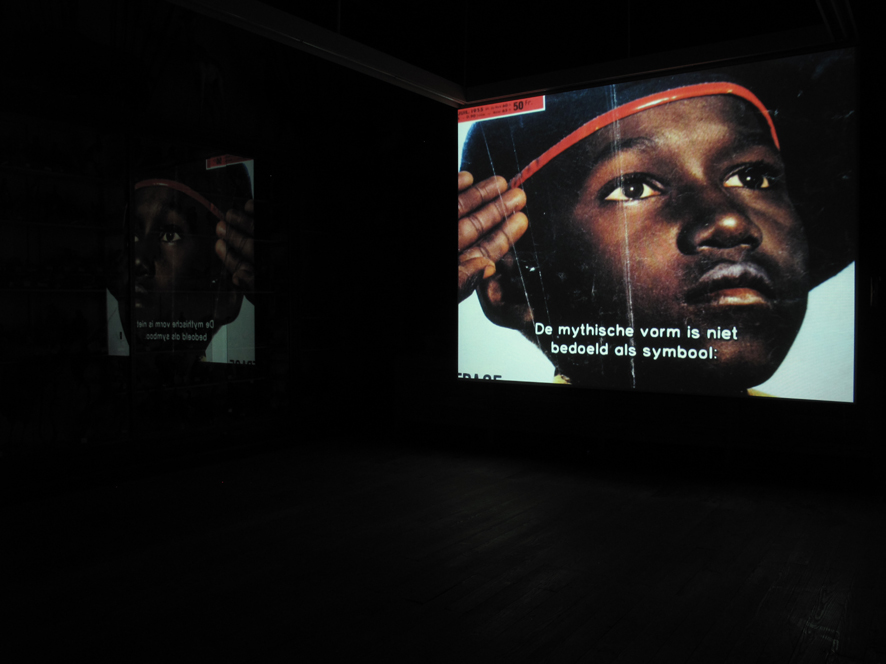 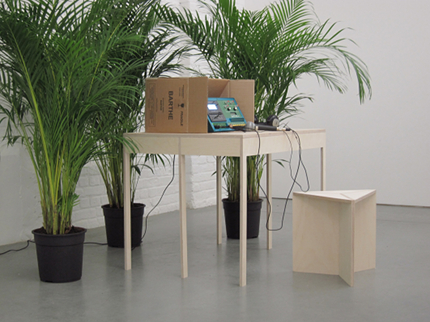 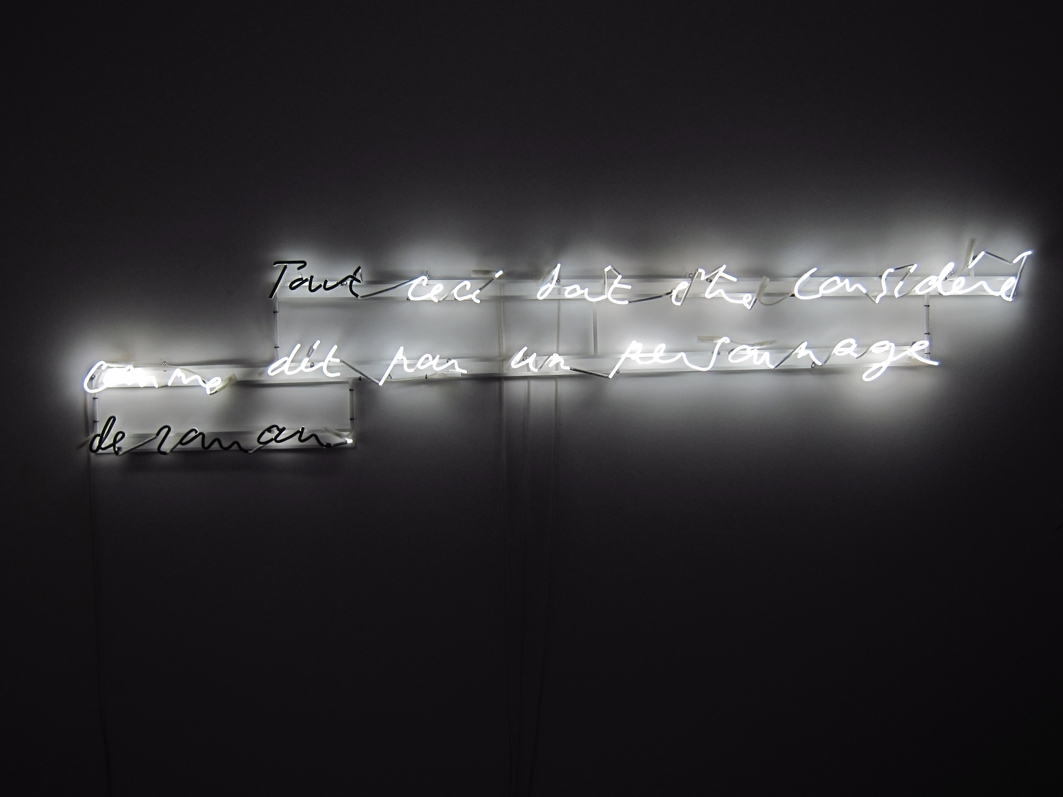 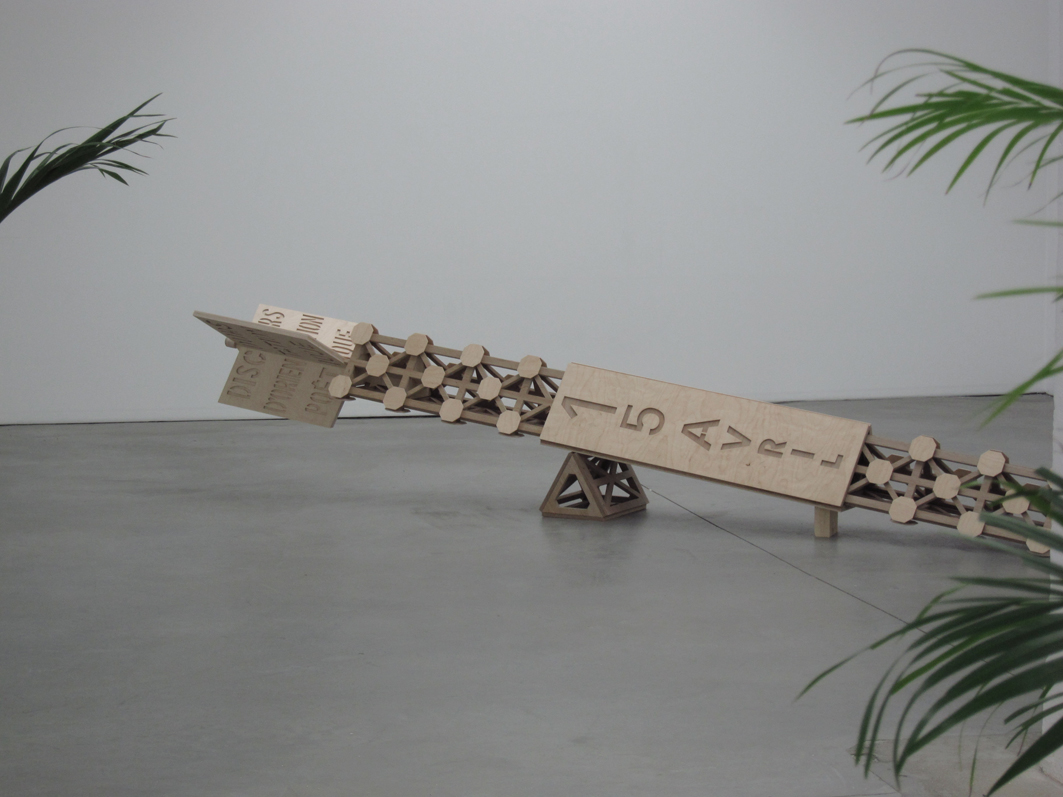 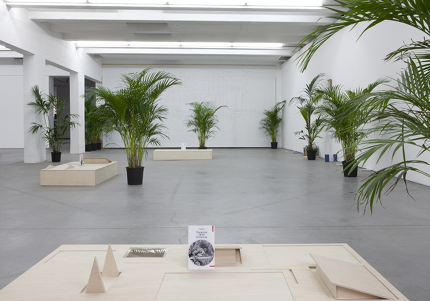 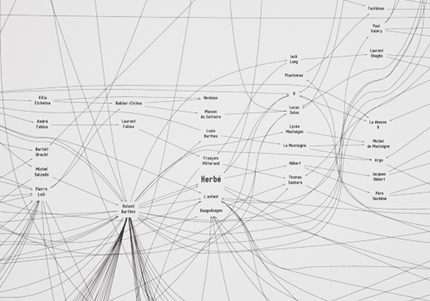 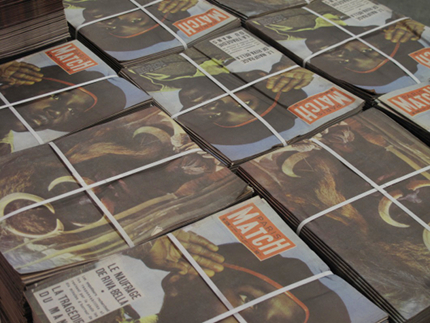 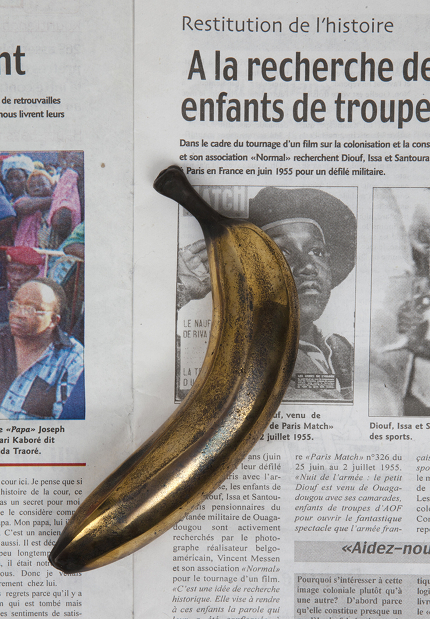 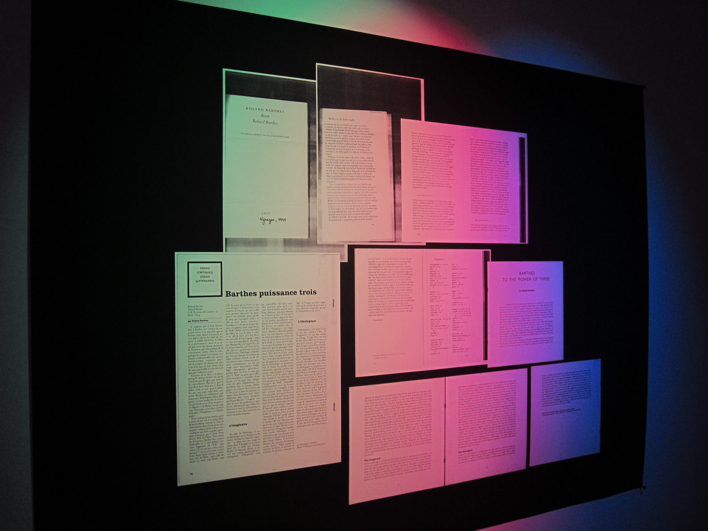 French critic and author Roland Barthes's literary work entails a main character – the reader – that is invited by a secondary character – the author – to ensure a future for him. The reader thus becomes a living actor for a swan song, the free rewriting of the author’s oeuvre. In these works, Vincent Meessen responds to this invitation made by Barthes in The death of the author. He brings back Barthes as a conceptual character called Herbé (read R.B. in french), which he applies to Barthes’ ideas to illuminate an unknown aspect of his biography.

As its starting point, the exhibition My Last life uses the cover of Paris Match, issue 326, published in 1955, which depicts a colonial cadet performing a military salute. Roland Barthes famously wrote about this cover in his Mythologies published in the late fifties. Vincent Meessen borrows the French thinker’s open-ended thread and speculates on the possible reasons that motivated Barthes to choose that particular picture. Meessen uses codes both from realism and narrative storytelling in order to construct a case study on the haunting mythography of colonial modernity.

Works
Vita Nova
HD Video, 27', sound & colour, 2009
Vita Nova is the original title of a novel by Roland Barthes that only exists in the form of preparatory notes. The book was never realised. Vincent Meessen takes the title of this 'future work' and, through lack of substance, adopts the dividing line between criticism and narrative. Pretending to be a documentary essay, Vita Nova questions realism as a story-discourse, where mythology never ceases to torment the documentary’s will towards truthfulness. A cover of Paris Match from 1955, known from Barthes' Mythologies (1957), shows a cadet who salutes the French flag. In Vita Nova this notorious icon of postcolonial criticism, becomes an archive loaded with hidden meaning.

Cameo
Table, seat, Barthe audio device, microphone, headphones, mp3 sound file, palm trees, 2011
Roland Barthes is presentified, without being present. His spirit haunts the exhibition. Cameo allows "the grain of his voice" to be heard, but it is also the voice of a character. The voice is an excerpt from a film by André Téchiné – played by Barthes, who remained uncredited. Barthes talks about the relationship between art and life in the most remarkable way: "(...) life is too short for art (...)". A sound device by the brand Barthe, mainly used in France for learning foreign languages, allows the spectator to listen to some words, to speak a few, have them recorded, and then played back. The viewer is invited to make an unalterable trace within the exhibition in "Barthes's way", by speaking and recording their words, actually taking part in the story spun throughout the works.

Forgery
Neon, black paint, 2011
Forgery announces that (All) this should be considered as spoken by a character (from a novel): it is a sculpture that mimics the writings of Roland Barthes in the most accurate way. This work immediately makes the visitor think about the relationship of "signifier" to their "referent" and the logic of interpretation that precedes their (re)animation. The gesture, which interrupts the quotation, brings to light a certain unreliability, and creates a distance between the original text and the neon lights as a format in contemporary art.

Cosmograph (Herbé)
Print on fabric, 2011
Cosmographs are "unreadable" text-images used as a tool in order to map out "narrative and critical plots". Their evolving shape is generated, put into space and optimally developed by an open source computer programme used for genealogy. Each cosmograph spans a network of connections, sometimes disturbing and confusing, between recurring people, characters, works and dates. The artworks have also been mapped out on the cosmograph, functioning as a virtual map of the exhibition.

Factitius
Brass, edition of ten different pieces, 2011
Every word in a language is the quote from an older language. Factitius – a series of realistic sculptures, placed on documents spread throughout the gallery – refers to the Latin word factitius meaning "fabricated/ produced / created". The word is the origin of different words such as "fact", "fiction" and "fetish". Both powerful and paradoxical, the word factitius is presented here as a "mana word".  'Mana' is a word always returning in the lexicon of the author, a floating "signifier" (for Barthes, a cultural signifier or one with layered meanings). The recurring presence of this sculpture in the documents, part of an archive collected by Meessen, distorts the historical factuality of the archive and questions their fetishist and fictional dimensions.

Speech (Discours)
Wood, 2011
Speech is derived from a monument erected by the former president and revolutionary, Thomas Sankara, in Ouagadougou (Burkina Faso) in remembrance of one of his anti-imperialist speeches. Formally, it refers implicitly to the adoption of the Russian Constructivism by an African elite. The sculpture takes over the gesture of Marcel Broodthaers, who crossed out the word 'politics' on a world map in order to make it a “poetic” map. The sculpture commemorates thus not only the "discourse of political orientation” of Sankara, but also proposes a different political arena, namely the discourse of poetic orientation. Through this connection between Barthes and Broodthaers, the artist produces a poetic-political memorial to mark the anniversary of the "Tierce forme" (third form) to be celebrated at a later date, namely the date on which Barthes decided to be a 'writer' and hence an 'artist'.

Corpus
Set of three display units in wood, various documents, palm trees, 2006–2012
Corpus shows part of the physical archive, in which Meessen has been bringing together various documents related to his research since 2006. Previously shown in open wood display cases as a composition of remains and forms, the archives are scattered against the walls of the exhibition space. Besides containing the publications that glorified Louis-Gustave Binger - who was Barthes’ grandfather on the maternal side - as a colonial hero, Corpus also contains another character: the white child, Bichon, who was born in Africa and a hero of Barthes’ anticolonial indictments that appeared in Mythologies, Bichon chez les Negres. In search for Bichon, Meessen discovers him at a recent auction at Pierre Bergé's and as a real character who was created by his own parents for Paris Match, National Geographic, Le Journal de Tintin, ...

Prolepsis
Three books, wood, inkjet prints, 2011
Prolepsis is a rhetoric device that plays with the temporality in a story. It is used in order to indicate an anachronism by anticipation. Here, the word is used for a collection of writings that is impossible to project: it is not a list of the books that were ultimately published by Roland Barthes, but a long list of study projects or imaginary books by the author. From this list, three books are selected and presented in the form of a full-size presentation model: Psychanalysis historique des imageries tronquées (Historical psychoanalysis of truncated imageries), Theatrum Orbis Verborum (The world of the theatre of words) and Mathesis Singularis, an imagined reference guide that creates an individual science for each study object. All of them are signed by a conceptual character called Herbé.

Fac Dissimile
Printed matter, 10.000 copies, 2009
Fac Dissimile proposes a massive redistribution of Paris Match number 326, in which the artist rearranged the contents according both to the colonial content and the mythic level of the images. This new editing of the magazine works upon the readability of the document of that time and shows the possibility for an updated rereading. Co-produced by Espace Khiasma (Les Lilas, F), De Brakke Grond (Amsterdam), Kiasma Museum (Helsinki) and Mannheim Kunsthalle/4.Fotofestival.

Third Form
Digital print installed with coloured lights, 2011
In the mid-70s, for the collection Ecrivain de toujours, where an author makes a portrait of a great classic, Barthes published Roland Barthes by Roland Barthes. With the release of this book, Barthes wielded a critical sleight of hand and wrote a critique of his own book. In the installation Third Text, Barthes' gesture is more important than the actual text. Meessen highlights this gesture in its own and figurative way. By diffraction, illuminated by a spectrum, the text is realised in its full conceptual dimension. The same text is reproduced three times in different languages, designs and typographies. Adopting this third form, touching upon a whiff of criticism, it now proposes the question of his own critical reception.