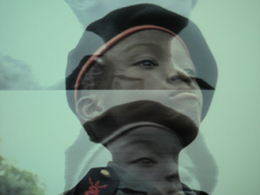 Specters. A Cinema of Haunting

Screening of Vincent Meessen's Vita Nova in a programme curated by T.J. Demos

Specters: A Ciné-politics of Haunting gathers a selection of recent international film and video that conjures the hauntings of our collective cultural imaginary. The screening series will open with among others the film Vita Nova (2009) by Vincent Meessen.

Some phantoms arise from past injustices and political traumas, some apparitions, of catastrophic times to come. Still others speak to the unfulfilled promises of the past that continue to live on, dormant in our present. The inclusions, diverse and necessarily incomplete, represent powerful examples that join poignant aesthetic formulation to inspiring political commitment, and have been drawn from a range of geographical contexts that reference history, culture, and politics in Europe, Asia, and the Americas.

The series borrows its title from the recent film Spectres of Sven Augustijnen (2011), examining the disquieting presences from times outside of the contemporary, it offers less an iconography of otherworldly beings than a conjuring of haunting disturbances existing at the edges of representation. At the same time, the program alludes to the history of militant cinema, what the Argentine Octavio Getino, a film-maker and theorist of Third Cinema, would call ciné-politics, a popular and radical image that embodied the critical legacy of Avant-garde movements.
To be sure, most of the films in this series bear little resemblance to the collective revolt of militant cinema; yet they do advance the erstwhile commitment to documenting violence, struggling against repression, refusing to forget, and striving for a better world. As such, this series offers a ciné-politics of decolonization that offers a critical antidote to pervasive amnesia, and a space where the post-militant image can be revisited. This coming-into-being, however, is no exorcism or redemptive return-to-forgetting, but, to reanimate Derrida’s words, presents an ethico-political imperative: to “learn to live with ghosts, more justly.”