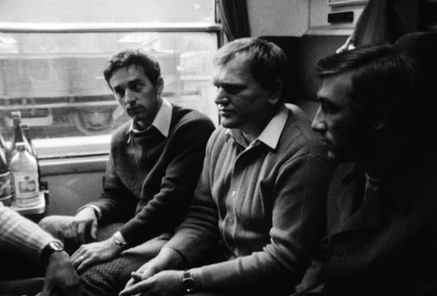 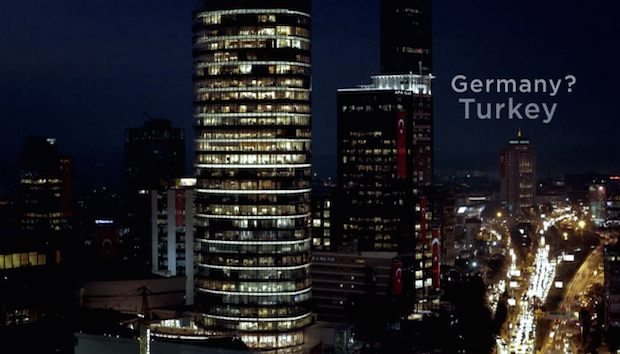 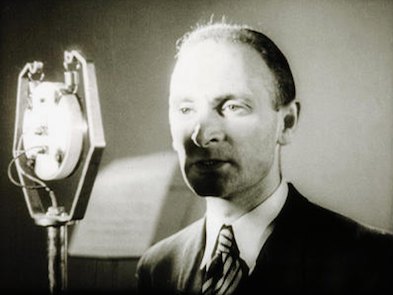 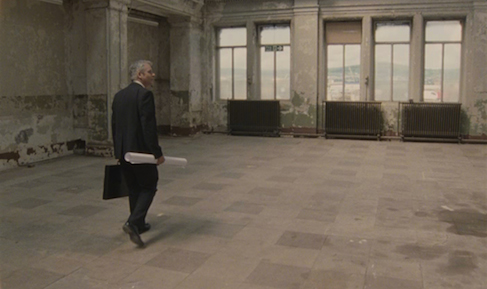 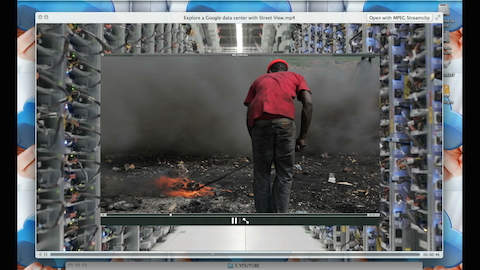 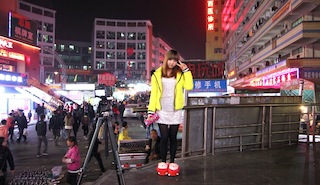 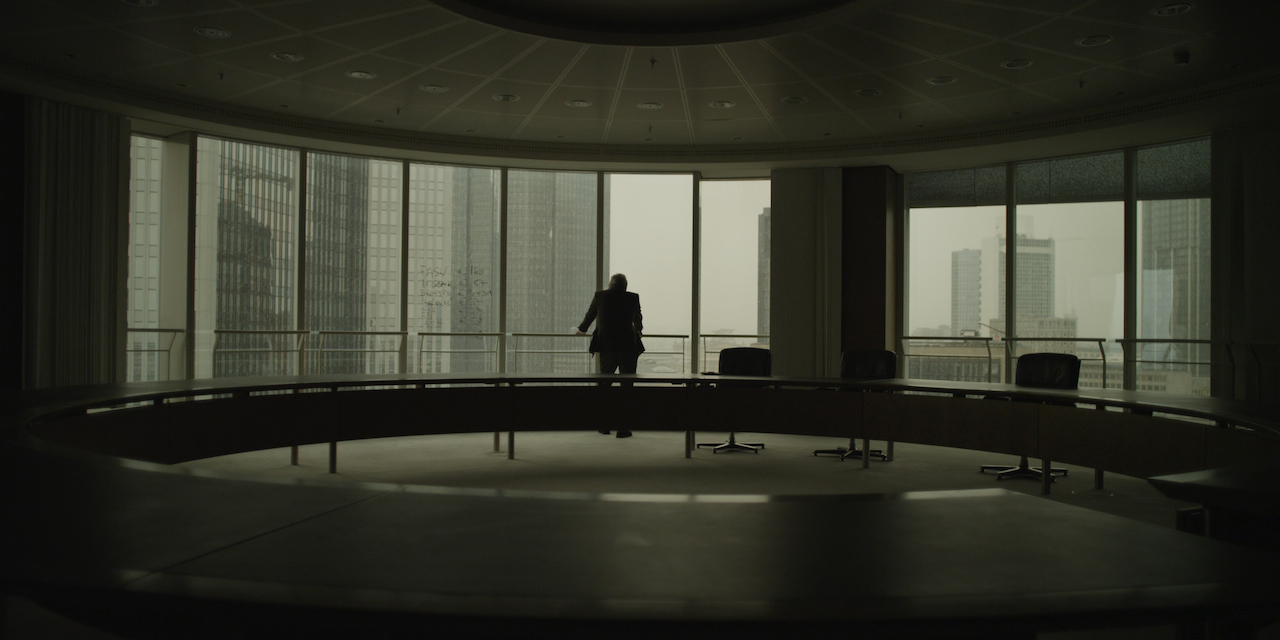 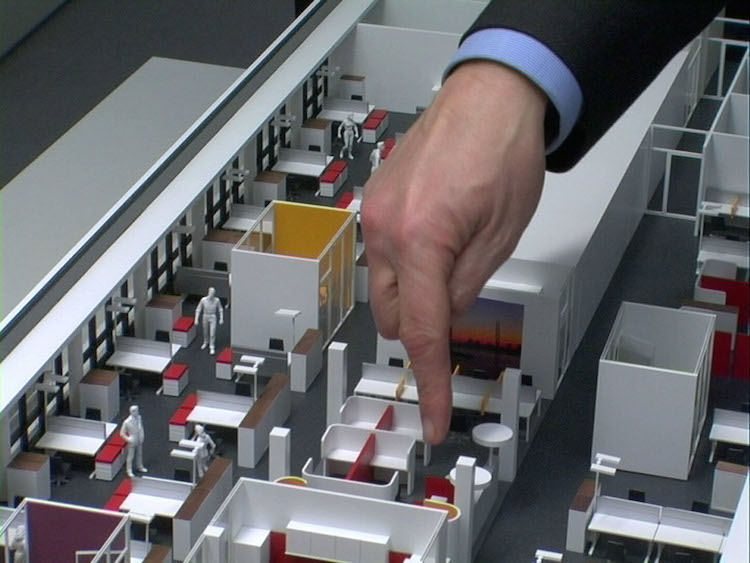 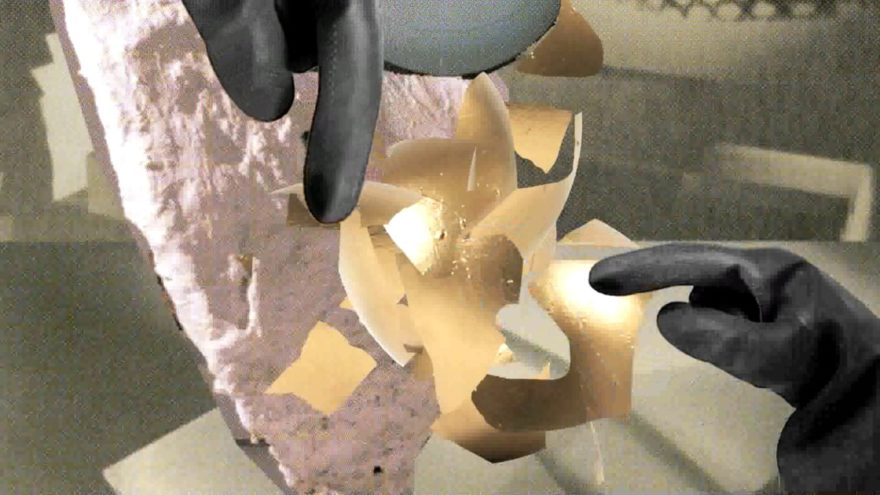 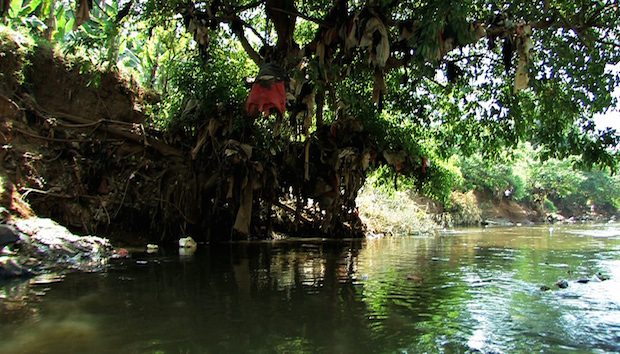 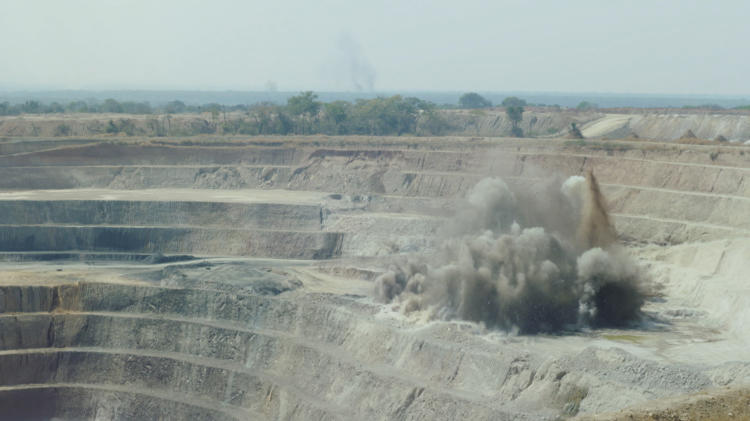 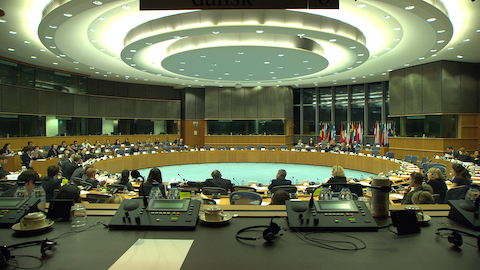 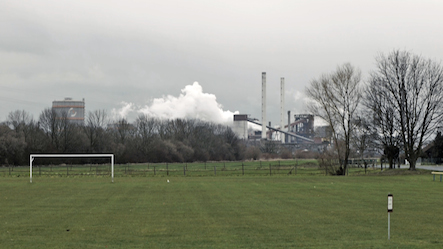 The Cost of Wealth

In Januari 2015, the German film curator Florian Wüst was invited by Jubilee, the Goethe-Institut Brussels, Argos, and Cinematek for a research residency. He explored the archives from the Cinematek and Amsab, among others, in search of cinematic traces that shed a light on the construction of the ‘European project’ from the early 1950s onwards.

The research resulted in an intense, ambitious and successful programme, The Cost of Wealth, a series of film screenings, talks and lectures on economy, labour, financialisation, and the history and present state of European integration and EU politics.

The screenings, talks and lectures took place at CINEMATEK, deBuren and the 25th floor of the World Trade Center in Brussels.

A project by Jubilee and the Goethe-Institut, in collaboration with CINEMATEK, Argos and deBuren. Download full program (pdf)

The 28 member states of the European Union are linked through numerous supranational institutions and a shared market. People, goods and services move freely. Social and cultural relations create a practical sense of community, whereas the external borders are increasingly fortified. However, aggravated by the current refugee crisis, the Greek debt situation, and the ruthlessly imposed EU austerity, it seems less and less clear how the political system of the union may develop further; nationalist agitation against the "European Project" rises dramatically.

The concept of a united Europe doesn't just sell itself. It never did. After World War II, great efforts were made to promote (West) European integration as a means to reconstruct and modernize the ruined continent. Against the background of the deepening division of the world, this process was instigated, supported and controlled by the United States. Between 1948 and 1952, the European Recovery Program (ERP), known as the Marshall Plan, provided direct financial and material aid to those European countries that stood outside Soviet influence. Accompanied by an extensive information and propaganda campaign in which film played a significant role, the Marshall Plan employed a politics of productivity: industrial rationalisation, new management and marketing methods, as well as international trade and open borders were advocated as prerequisites to wealth and freedom for all.

After the labour movements of the late 19th century had won the battles for the first social reforms and union representation, the "age of redistribution" (Pierre Rosanvallon) peaked in the 1950s and 60s. Human labour had become expensive and politically powerful. In response, capitalists looked for new and better profits. One option was to shift production to where cheap surplus labour was located, in the global South, another to invest in assets on the financial markets. With the introduction of flexible currency exchange rates and the deregulation of the movement of capital in the early 1970s, a whole different universe of moneymaking emerged. Money is exchanged for money and generates new money. By virtue of computerised trading, the speed of these financial transactions accelerated immeasurably.

All capital circulation is highly speculative and eludes purely rational comprehension: the stock exchange as a place of magic has been a perpetual topic of literature and cinema. But the financial crisis of 2008 showed once more that the effects of allegedly abstract economic processes concern the real lives of those who lost jobs and houses. The dominance of banks and corporate interest over governments and people is seen by many as a great threat to democracy.

The Cost of Wealth deals critically with the relationship between neoliberal economy and democracy against the background of the drawbacks and benefits of modern industrialisation in the 20th and early 21st centuries. The series reflects on our ways to exploit resources, work for money, trade assets, obtain services, use mobile technologies, build borders, develop urban spaces, and privatize the commons. It also aims to discuss the potential of political struggle and social resilience that challenge and possibly change dominant narratives and power structures for the sake of a better life for more than just a few – an idea at the centre of the historical foundation of a united and solidary Europe.

The Cost of Wealth presents international historical and contemporary artistic documentary, educational, and promotional films, as well as cinema classics, to address some of the most urgent and complex issues of post-industrial Western society.

WHAT MAKES EUROPE
Preceded by the Benelux customs agreement of 1944, the process of Western European integration helped to establish free trade and a functioning market. This short film programme focuses on the pros and cons of markets – from early commodity speculation and foreign labour recruitment to EU enlargement policies and the hegemony of corporate power.

L'ARGENT, Marcel L'Herbier, FR 1928, 164', French intertitles
Based on the eponymous novel by Émile Zola from 1891, L'Herbier's monumental masterpiece of silent cinema revolves around the corrupting power of money. The story depicts the rivalry between two Parisian bankers, and gives a fascinating account of the mechanisms of stock market speculation.

BRUSSELS AND THE URBANIZATION OF FINANCE CAPITAL
A lecture by David Bassens, Cosmopolis VUB Brussels, followed by Blueprint, an animation film by Justin Bennett with live interpretation by Michael Schmid (flute) and Raphael Vanoli (electric guitar)

The urban environment has become increasingly enrolled in global and, at the same time, financial circuits of value. Looking out from the 25th floor of the World Trade Center, David Bassens' lecture aims to put the contemporary entanglements of real estate in Brussels with financial institutions and markets into perspective. It does so by providing an exploratory mapping of key actors involved in the financialisation of (parts of) the European Capital, which has wide-ranging effects on the social and economic fabric of the city.

Accompanying the lecture is Justin Bennett's Blueprint (NL 2015, 30'), a work that combines hand-drawn animation and stenciled texts. Blueprint’s drawings are based on real city maps and different types of urban growth from around the world. The film functions as a score and is interpreted anew by live musicians with each screening.

OFF THE CLOUD
Commissioned by the European Committee for Catholic Education and dedicated to the youth, Europe means you describes Europe as a birthplace of new technologies. The selection of films connects this optimistic story of technical and social advancement to present-day urban renewal and mobile computing, and to dumping sites for e-waste in Africa.

IPHONECHINA, Christian von Borries, DE 2014, 69', English subtitles
Imagine Apple was a state. Would you rather live in Apple or in China? By comparing one of the leading global enterprises and the world's most populated country, this documentary essay film reflects on how software produces new forms of governance, and how this relates to real desire and real exploitation.

HET BANKET DER SMOKKELAARS, Henri Storck, BE/FRG 1952, 106', French subtitles
Storck's first full-length fiction work conveys the ambivalence of European unity after the end of World War II. What could have been praise for the newly created Benelux became a sharp reflection on the relativity of borders, the fear of corporate competition, and the delights of illegality.

MASTER OF THE UNIVERSE, Marc Bauder, DE 2013, 88', English subtitles
An abandoned bank. A former top investment banker. An uneasy glimpse into a parallel world that usually refrains from revealing itself: Rainer Voss, who handled assets worth millions each day, gives his personal insight on how the glittering finance industry really operates.

Fictions and Futures #2 traces the making of highly abstract financial instruments back to the concrete production of everyday food basics. In the mid 19th century, Chicago became the central hub for agricultural products and financial innovation. It was here that new paper receipts based on grain were created that allowed to sell future products today: wheat or corn that was not even sowed yet. A century later, in the 1970s, a whole new financial industry evolved around this type of risk management, trying to foresee the unforeseeable by means of futures and other derivatives. Ever since, financial alchemists have come up with increasingly exotic products; abstractions built on abstractions, which mathematically eradicate risk from our lives, only to bring it back as the spectre of a catastrophic financial meltdown.

HUMAN CAPITAL
Industrial automation liberated factory workers from monotonous labour, but as a result of this many lost their jobs. Today's flexible office spaces are no less designed to optimize the employee's performance. From Marshall Plan-aided economic recovery to future speculation on female-driven re-industrialization, this programme discusses the ambiguity of growth and productivity.

SCRAPS OF VALUE
These four contemporary documentary and fictional short films combine a variety of subjects: copper mining, post-colonial crisis and the lives of refugees. Global and local economic structures – ranging from bureaucratic and corporate domination to self-help – are explored through a genuinely human perspective.

ABENDLAND, Nikolaus Geyrhalter, AT 2011, 90', English subtitles
A film poem about a continent after sunset, hyper-alert and obsessed with protection. Night shifts in the growing service economy are juxtaposed with moments of leisure, birth, and death; a Babel of languages. All this has been captured in images that make us look at Europe of the early 21st century in a new way.

HISTORY OF PROGRESS
The mining and processing of coal was a major motor for economic progress in Europe. It not only propelled the modernisation of life in the Industrial Age, but also shaped the identity of whole communities and regions. Against this background, the programme presents sharp and relentless analyses of political, social and personal relations.

L'EMPLOI DU TEMPS, Laurent Cantet, FR 2001, 134', Dutch subtitles
Cantet's drama tells the story of Vincent, a middle-aged man, who is unable to admit to his family that he lost his job in a prestigious consulting firm. He pretends to go to the office every day. In reality, he aimlessly drives around. To sustain his bourgeois lifestyle, he sets up an investment scam.

The European Union and International Monetary Fund (IMF) lent more than 400 billion euros to Greece, Ireland, Portugal, and Cyprus to keep these countries solvent. The lenders granted enormous power to the three institutions of the so-called troika: the IMF, the European Central Bank and the European Commission. Without any public accountability, the troika is forcing the states in crisis to implement policies that are tearing the social fabric of their countries apart. German journalist and best-selling author Harald Schumann travelled to Athens, Lisbon, Dublin, Nicosia, Brussels, Washington, New York, and London in order to find out who has actually benefited from these austerity measures. He presents this question to ministers, economists, bankers, and to those who suffer from such policies: the unemployed and the ill.

Unearthing Disaster is a visual research project focusing on the resistance to the construction of a large-scale open pit gold mine and mineral processing plant in the Skouries forest in Chalkidiki, Northern Greece. Angela Anderson and Angela Melitopoulos also reflect on the crisis management of the European Union, which has encouraged a new phase of colonial politics and comprises private investment and resource extraction that is pushed through against the will of local communities. Unearthing Disaster not only addresses the dirty business of gold mining, but implies a catastrophe on many levels: the loss of memory, the loss of expression, and the violent, calculated and destructive speed of "disaster capitalism" that literally pulverizes the natural and cultural environment.