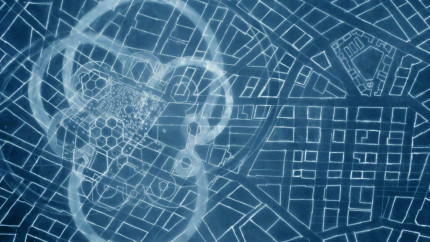 A film by Justin Bennett

Blueprint is a 33-minute film that combines hand-drawn animated city maps and stenciled texts with a live soundtrack.

Each time Blueprint is screened, it is interpreted anew by live musicians. The musicians follow rules and suggestions developed in close collaboration with a number of improvisers, including the Amsterdam-based MAZE ensemble and Barcelona-based Atolón. Within the performance, there are no restrictions on instrumentation or genre.

Blueprint asks questions to the musicians and the audience regarding the links between social, urban and musical structures, work, creativity and freedom. The drawings in the work are based on maps of real cities and different types of urban growth from around the world.

The version below was performed by MAZE ensemble during the exhibition Blueprint / Seism (2015) at Gemak in Den Haag. The performance was filmed by Melissa Cruz Garcia & Hannah Dawn Henderson.

Watch the trailer of Blueprint on Vimeo