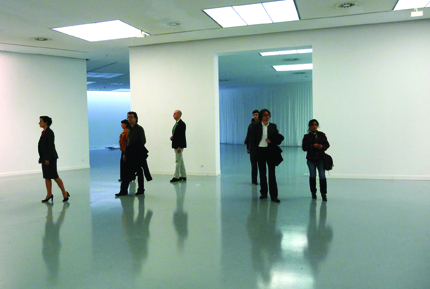 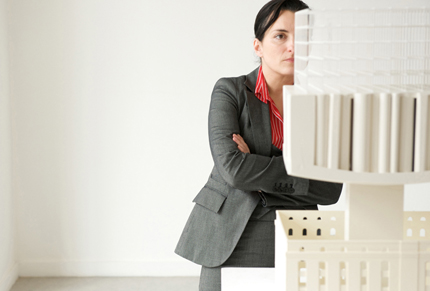 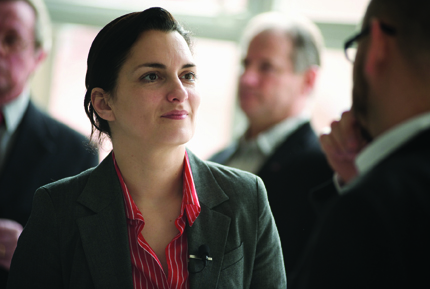 The Good Life – (a guided tour)

A film by Vermeir & Heiremans

In the background technicians are installing a prestigious exhibition, whilst a smartly dressed lady guides a group of people around a series of pristine white spaces, some of them filled with crates and wrapped-up paintings. Along the way, she not only comments on the art, but also reveals the building to her audience from a unique perspective. Describing interiors, great views and the city’s vibrant opportunities, the lady turns out to be an estate agent who is selling an up-market architectural proposal and a lifestyle that grafts the ‘value’ of art with its institutions. Moving through the labyrinthine building, she finds herself lost in narrow corridors and staircases. Meanwhile the future development projects itself into the group’s collective imagination, fed by the visionary architectural model on display.

"The Good Life (a guided tour) (2009) considers how 'strategic foresight' has become part of the socio-economic plan for art institutions in the twenty-first century, locating these institutions as central in the regeneration of cities. The Good Life (a guided tour) imagines a guided tour around a fictional art institution that has decided to sell off its building in order for it to be transformed into luxury apartments. The depicted institution – itself an uncanny 'collage' of four existing major European institutions – is utilizing its assets, promising major regeneration to its host city. The 'neutrality' of the gallery space allows it to be transformed into a real estate opportunity. The estate agent guiding the tour adopts a verbal style that veils any overt notion of gentrification, while conjuring up impressions of aspiration and opulence – a lifestyle fantasy projected onto an empty shell. Incorporating a maquette of the extraordinary building designed by the renowned architecture office 51N4E, The Good Life (a guided tour) adopts an approach that critically 'over-identifies' with its subject matter to the point of adopting all its rhetorical forms. The Keynesian thesis of pumping steroids into the demand is taken to a near-delusional aesthetic plane by generating unattainable desires for the individual."

The Good Life (a guided tour) exists both as an autonomous single screen video piece and as an installation version with 2 synchronised projections. In its first presentation, the video functioned as a ‘marketing tool’ for the fictional real estate development THE GOOD LIFE, which was the title of the Vermeir & Heiremans solo exhibition at Arnolfini, Bristol (UK) in Spring 2009. The show was curated by Nav Haq.

Distribution: ARGOS Centre for Art and Media, Brussels (BE), Jubilee (BE)

With the support of Flanders Audiovisual Fund (VAF)

From Industry to Industrial , screening during New Industries Festival at HMKV, Dortmund, DE (2014)

Contour On Tour, group exhibition at the Flemish Parliament, Brussels (2012)

How We Move, Screening programme at Salt, Istanbul (2011)

Notions of the Artist, screening at Kunstverein, Frankfurt (2009)