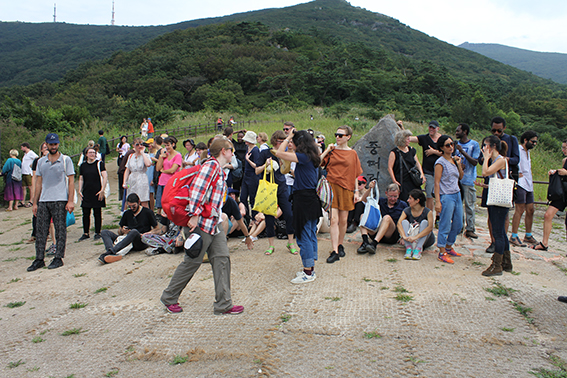 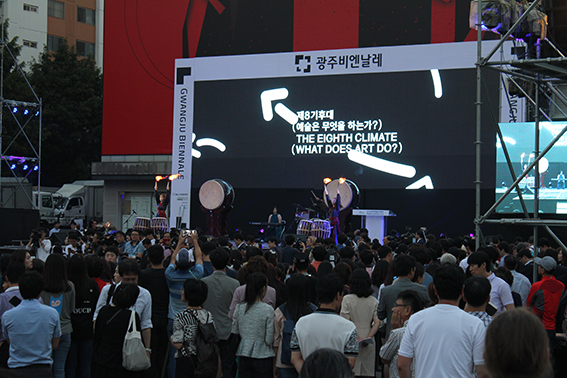 11th Gwangju Biennale: To All the Contributing Factors

Maria Lind, director of the 11th Gwangju Biennale (GB11), and curator Binna Choi invited Jubilee as one of the Gwangju Biennale Fellows to To All the Contributing Factors, a three-day Forum. The Forum took place from 2 September until 4 September 2016 at various locations in Gwangju, South Korea.
The GB11 Biennale Fellows consisted of one hundred small and medium-scale art organizations from across the world, whose work makes important contributions to the art of today, yet remains under the radar very often. At the Forum, the Biennale Fellows as well as their peers and colleagues were invited to come together to manifest a critical mass in the international artistic context, share experiences and discuss the future of this kind of work, especially regarding questions of value, continuity and scale.

Maria Lind, Binna Choi and their team used the biennial as a momentum to acknowledge the invaluable work of small organizations across the globe. They believe such organizations often function as the research and development department of the art world, generating new ideas, supporting artists to experiment and to cultivate their practices, and shaping new curatorial and educational methods; foster active relationships to their immediate surroundings, be they urban, suburban or rural, and keep close relationships with other fields of knowledge and social movements. This way such institutions make a difference in relation to dominant mainstream developments.   Jubilee, represented by the artist duo Vermeir & Heiremans, took part in guided tours around Seoul and Gwangju and in presentations and discussions during the Forum. Vermeir & Heiremans also attended the opening week of the Gwangju Biennale.

The Forum opened with a day-tour organized for the Fellows along a number of alternative and some more established art spaces in Seoul. During this tour, the Fellows met with Bartolomeo Mari at MMCA, where an exhibition equivalent to the Turner Price Exhibition in London was on display. The tour continued to visit smaller art spaces, such as Art Space Pool and the Book Society, a small independent publisher of artist publications in Seoul. The last host of the evening was Sunjung Kim (former Samuso) of Art Sonje, a centre that is being refurbished now, but which had a group show on view amidst the temporary roughness of the building.

After the guided tour in Seoul, the Fellows travelled to the southern city of Gwangju for the opening of the Gwangju Biennale 10. The biennale takes place in many venues across the city, the two principle ones being Biennale Hall and Asian Culture Center (ACC). These two institutions are located in rather oversized buildings. The very small institutions were part of GB11 too, like Mite Ugro, an artist residency space in an old market, and some smaller museums. Sprouted from the need to memorize the Gwangju Massacre on May 18, 1980, the Gwangju Biennale is fundamentally politically inspired. The Massacre was a protest against the self-serving military dictatorship. Although it was brutally repressed, it eventually led to democratic rule in South Korea, and to the conviction of the dictator and the military involved in the attack on the citizens of Gwangju. It seems only logical that the 18/5 Archive is part of the biennial.

After the official opening evening, the Forum opened officially with a number of keynotes, some in Korean (with simultaneous translation), others in English. Andrea Phillips (Professor Valand University, Gothenburg, Sweden) gave the final presentation on “All the Contributing Factors”.

The next morning all Fellows met at the ACC, where they were split up in nine groups. The thematic group Jubilee was assigned to, was focused on artist initiatives. Besides Jubilee, participators included the collective Chto Delat from St. Petersburg, represented by Dimitry Vilensky; the Japanese artist Daisuke Kosugi; Western Front from Vancouver, represented by Pablo De Ocampo; Art Group 705 from Bishkek, represented by Kuba Myrzabekou; Ruangrupa from Jakarta, represented by Ade Darmawan; INCA from Seattle, represented by Yongkuk Ryou; and Azar Mahmoudian, a young curator from Teheran who was assistant curator of GB11. Pretty soon it became clear how diverse this 'identity' concerning 'artist initiatives' was. After all participants introduced themselves, the group was supposed to come up with concrete ideas about an alternative for a number of the current issues (sustainable practice, value and scale, notably) in the arts, which turned out to be a bridge too far. All participants shared a lot, but when going into detail and into the specific socio-political contexts from which they operate, it became clear that their environments were too diverse to really engage in a discussion about sustainable practices.

After the group sessions, a public assembly took place in which all groups reported. An enormous amount of material had to be condensed in a few captions. A document based on the assembly will later be issued by the Biennale.

One of the best moments of the Forum was when, on the last day, all of the Fellows were invited for a hike together to Mudeungshan, the nearby mountain. This 'walking meeting' was perhaps the most rewarding, since amazing conversations where part of the climbing towards the mountain summit. On the mountain top all the Fellows were rewarded with a breathless view over Gwangju. The Forum was the perfect way to spend time with many interesting people from several smaller and larger institutions from all over the world. Simply attending the opening of a biennale could never achieve this; often there is not even an occasion to meet the other artists in the show. GB11 was quite different in that respect. There were many formal and informal moments to meet, talk, and exchange knowledge....