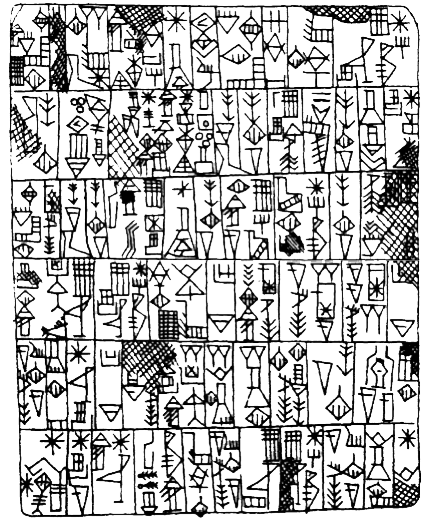 Transcription of a ‘Jubilee’ debt cancellation – a periodical decree as instituted by Sumerian and later Babylonian kings, in order to free their citizens of debts and slavery, and relieve social tension. Sumeria, ca 2400 BC

Jubilee was first established as a dialogue among artists and cultural workers in 2012 in Brussels. Since then it has evolved into an artist-run platform that provides continuous support for the work of five artists, while hosting others on a project base. Jubilee’s focus is twofold. First, it is an organisation for the production of the work of these artists, where research and collaboration are considered essential values. Second, these shared interests lead to collective research projects that focus on themes that encompass shared interests. The conditions of artistic production form a recurring thread.

Justin Bennett, Eleni Kamma, Vincent Meessen, and Vermeir & Heiremans work in diverse media but always on a basis of collaborative research that brings in transversal knowledge from a wide range of humanities. For the Jubilee artists, collectivizing and sharing partnerships has been an opportunity to use the benefits of networks, visibility and other resources, while alleviating the responsibilities of fundraising, bookkeeping, legal costs, etc. But Jubilee remains primarily a platform for content exchange and discussion. Together, the artists constitute Jubilee’s collective artistic direction.

The Jubilee team, featuring a curator-coordinator, a jurist, an audio-visual specialist and a communication collaborator (occasionally supported by assistants and interns), work in close dialogue with the artists to follow up upon their work and collective research projects.

As a unique way for an artist initiative to reach out to others, Jubilee engages in collaboration beyond its own ecosystem by actively inviting guest artists, researchers and other professionals, and developing collective research projects that they can join. Within these projects, Jubilee curates and facilitates exchange between implicated, but formerly not necessarily involved, groups: direct contact, dialogue, reconsideration of the nature of their relationships, reframing of roles, expectations, and responsibilities. As such, Jubilee is a multi-sided platform that initiates alternative approaches by enabling direct interactions between distinct yet mutually dependent people and parties.

After The Value of our Love (2013), Haben und Brauchen (2014), The Cost of Wealth (2015), Jubilee’s most encompassing collective research project to date Caveat (2017-ongoing), is a good example of this advanced practice. An organization where artists and art institutions of all kinds are engaged to participate in a mentality shift in approaching their professional relationships. These normally opposed stakeholders manifest themselves ambitious to participate because of mutually shared interest, whereas their relationship has often economically been thought of as opposed and hierarchical. By harnessing commissioned artistic in situ research, Caveat aims at reconfiguring contracts: instead of formalizations of bilateral exchanges of value under clearly defined conditions, they should function in terms of shared interest and developing sustained relations.

Transcription of a ‘Jubilee’ debt cancellation – a periodical decree as instituted by Sumerian and later Babylonian kings, in order to free their citizens of debts and slavery, and relieve social tension. Sumeria, ca 2400 BC
1 / 5
x