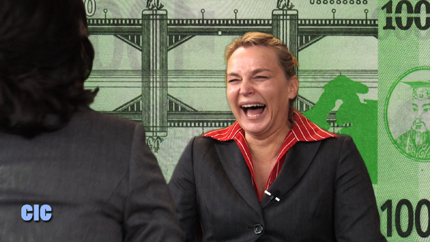 Vermeir & Heiremans, The Residence (a wager for the afterlife), 2012. Video still

Presentation by Vermeir & Heiremans at The Atlantic Project, festival of contemporary art in Plymouth

Vermeir & Heiremans use their own home – a self-renovated loft apartment in a post-industrial building in Brussels – as source material to examine the dynamic relations between art, architecture and economics. This ongoing project defines their private habitat as an art work, investigating how to 'financialise' their domestic space by producing representations in the public realm, through what they term 'mediated extensions', i.e. lectures, exhibitions, faux lifestyle magazines and video works. In Plymouth this will take a variety of forms, focusing on globalisation, gentrification and the history of finance in relation to this historic maritime port.

As part of the post-war plans to rebuild the city, Plymouth's Civic Centre was designed by city architect Hector Stirling in the International modernist style and was opened by the Queen on 26 July 1962. It is a fourteen-storey concrete and glass tower block, with a 'butterfly' roof canopy and an attached two-storey block to the north. The tower housed the offices of the various municipal departments of the city council, as Plymouth’s main administrative centre. The top storey was originally the Rooftop Restaurant, which was open to the public, but closed in 1975. By the 21st century the city council felt it was too expensive to maintain though. Plans to demolish the building were scrapped when the building became Grade II Listed in June 2007. It was eventually sold to the developers Urban Splash in 2015 for one pound, who plan to refurbish the building.