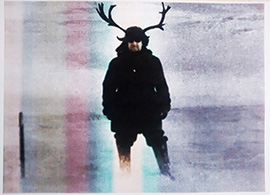 In this docu-fiction short film, we meet Viktor Koslovsky, a geologist who worked at the Kola Super-Deep Borehole near Zapolyarny in north-west Russia until it was shut down. Ever since, Viktor has stayed on-site as much as possible, carrying on the work started by Dr. Huberman, the founder of the project. He recounts the history of the KSD and the geology and history of the area. He guides us around the ruined site, his small laboratory and of course the borehole itself. He explains his work, listening to vibrations deep within the earth, linking geology with Sami shamanism and divination.

The Kola Super-Deep Borehole is the deepest man-made hole on earth - more than 12 km deep. It was a Soviet geology research project started during the Cold War. In addition to gathering data about the geology of the earth's crust it formed part of Project Globus, a network of seismic listening stations which was to act as an early-warning system for natural disasters as well as for monitoring enemy nuclear tests. After the fall of the Soviet Union the project was slowly wound up and the site was abandoned in 2008.

In collaboration with the curators and producers behind Dark Ecology – the Dutch organization Sonic Acts, and the Norwegian curator Hilde Methi, SALT will throughout Spring 2018 show seven artworks that were developed and exhibited in the border zone between Norway and Russia from 2014 to 2016. The Dark Ecology project was inspired by the ideas of the philosopher Timothy Morton, who argues that our knowledge about the human impact on the globe makes it necessary to rethink the concepts of nature and ecology. Ecology is ‘dark’.

7:00 pm // Introducing you to SALT Art: Selected from Dark Ecology.

7:30 pm // Opening of the sound installation unearthed 2014-2018 by BJ Nilsen and the video installation Barents (Mare Incognitum) by HC Gilje.

8:15 pm // Sauna Session with screening of Justin Bennett's Vilgiskoddeoayvinyarvi – Wolf Lake on the Mountains. (NOTE: This is a sauna session – please bring your swimwear. The sauna is 65 degrees. Limited seats!)

Barents (Mare Incognitum) by HC Gilje depicts the border zone, facing the North Pole, between Norway and Russia. The video shows a slowly rotating view of the Barents Sea: up becomes down, East becomes West, as the custom-built orbital camera slowly rotates around its own axis and captures the world that revolves around it. The view allows for an atypical exploration of the space and landscape to be experienced, as borders and thresholds become invisible and the potential disaster inherent in the ocean is made visible. The installation’s proximity to the Bjørvika shoreline may serve as an additional reminder of the pertinence of the conceptual issues that Barents (Mare Incognitum) raises: Where North may also become South, just as East becomes West.

unearthed 2014-2018 by BJ Nilsen captures the uncanny contrasts within soundscapes on the borderland between Norway and Russia, where the sparse beauty of the Arctic landscape meets industrial decay and heavy pollution. The installation invites participants to pay attention to the nuances of these sounds as they travel along the structure of The Arctic Pyramid at SALT, and to think about the landscapes, geography, and circumstance that they represent. unearthed 2014-2018 stems from unearthed, an ongoing collaborative research project between BJ Nilsen and filmmaker Karl Lemieux (CA) that was originally commissioned by Sonic Acts/Dark Ecology in 2014.

Justin Bennett’s Vilgiskoddeoayvinyarvi – Wolf Lake on the Mountains is told from the perspective of Viktor, a fictional geologist who worked on the Kola Superdeep Borehole (KSD). At 12 kilometres deep, the KSD is one of the deepest man-made holes on Earth, and a remnant of a Soviet geology research project that started during the Cold War. In addition to gathering data about the geology of the Earth’s crust, it was also part of a network of seismic listening stations which functioned as an early-warning system for natural disasters. After the fall of the Soviet Union, the KSD was slowly decommissioned and eventually abandoned in 2008. In Vilgiskoddeoayvinyarvi – Wolf Lake on the Mountains, Viktor decided to continue living at the site when all his colleagues left. Viktor’s voice guides us around the KSD, linking the features of his surroundings to aspects of the past, to himself, and to the connections between the geology of the area and Sami shamanism and divination.

Vilgiskoddeoayvinyarvi – Wolf Lake on the Mountains by Justin Bennett (NL/UK) is screened in Árdna 8/2, 21/3 and at other occasions (tba).