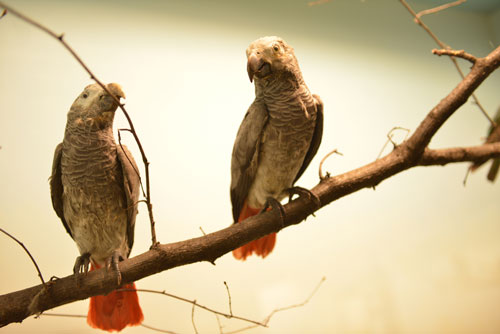 Hosted by the Cameroonian artist magazine DiARTgonale, the series of special editions presents the outcome of a long-term curatorial endeavour initiated in 2010 for which Cameroonian and European artists collaboratively produce new, research-based artworks. Annette Schemmel curates the project in dialogue with artist Marjolijn Dijkman.

The second issue deals with ECHOES: a famous novel, an idiosyncratic image bank, a sound archive and historical statements reverberate in the contributions. Artists, writers and passionate amateurs of both continents have engaged with each other in the production of intriguing artworks, interviews, surveys and stories. The sculptors Justine Gaga and Beate Engl for example have thought through the artistic references that inform their individual practice in Cameroon and Germany. The resulting objects, drafts for performances and text collages are entitled “Echo”. They exhibit and question canonised artistic knowledge. Additionally to this project, Annette Schemmel promotes the panoply of art libraries in Western and Central Africa that were recently initiated.

Together, film-maker and artist Vincent Meessen and writer Lionel Manga appropriate the correspondence of French novelist Céline, sent from Cameroon in 1916: “Post-Script” is a fictive correspondence echoing reflecting on Céline’s dual identity as hygienist doctor and author. Under the title “Hard to Catch” Marjolijn Dijkman engages in a triangulation of photographic representations of Cameroon, ranging from the late-colonial Prunet archive to the image bank of Rose and Nicolas Eyidi to the contemporary photography by exiled Patrick Wokmeni. Additionally, Joachim Oelsner-Adam shares his passion for the decaying audiotape boxes gathered in radio stations across the country. Finally, the political resonates in the critical contributions by artists Em'kal Eyongakpa and Stefaan Dheedene.