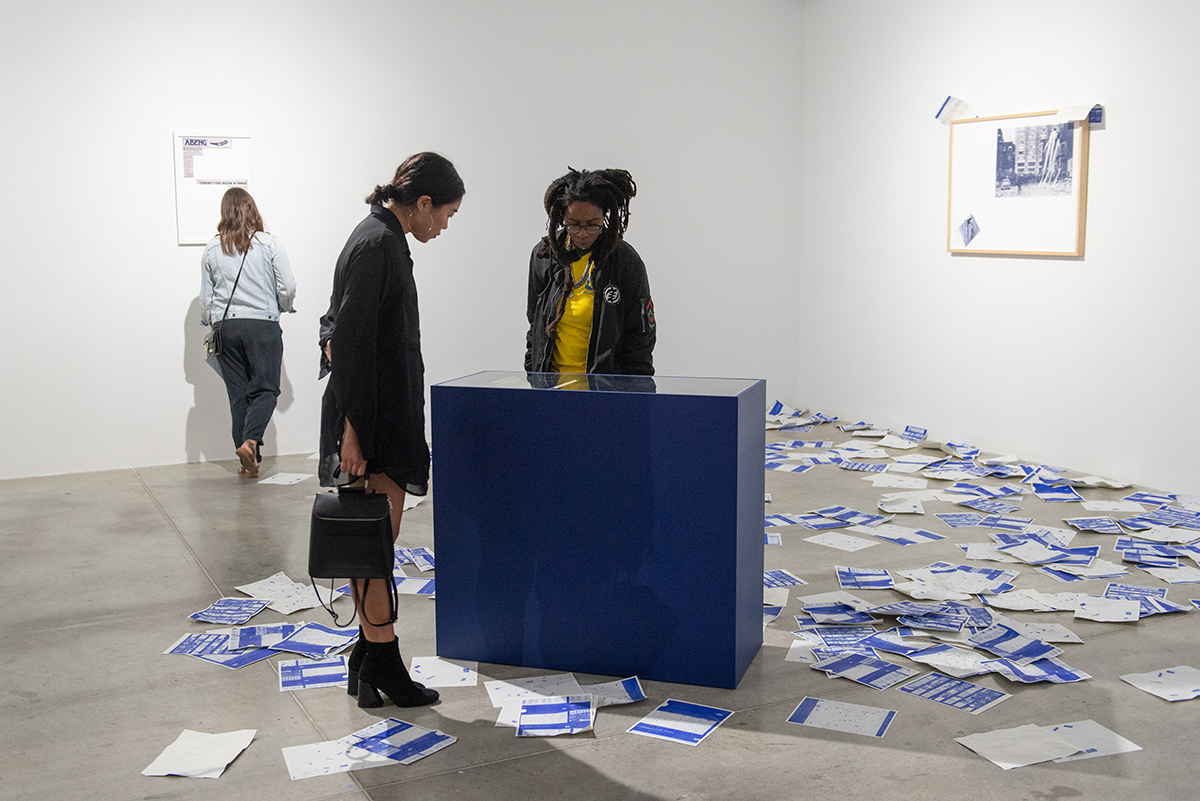 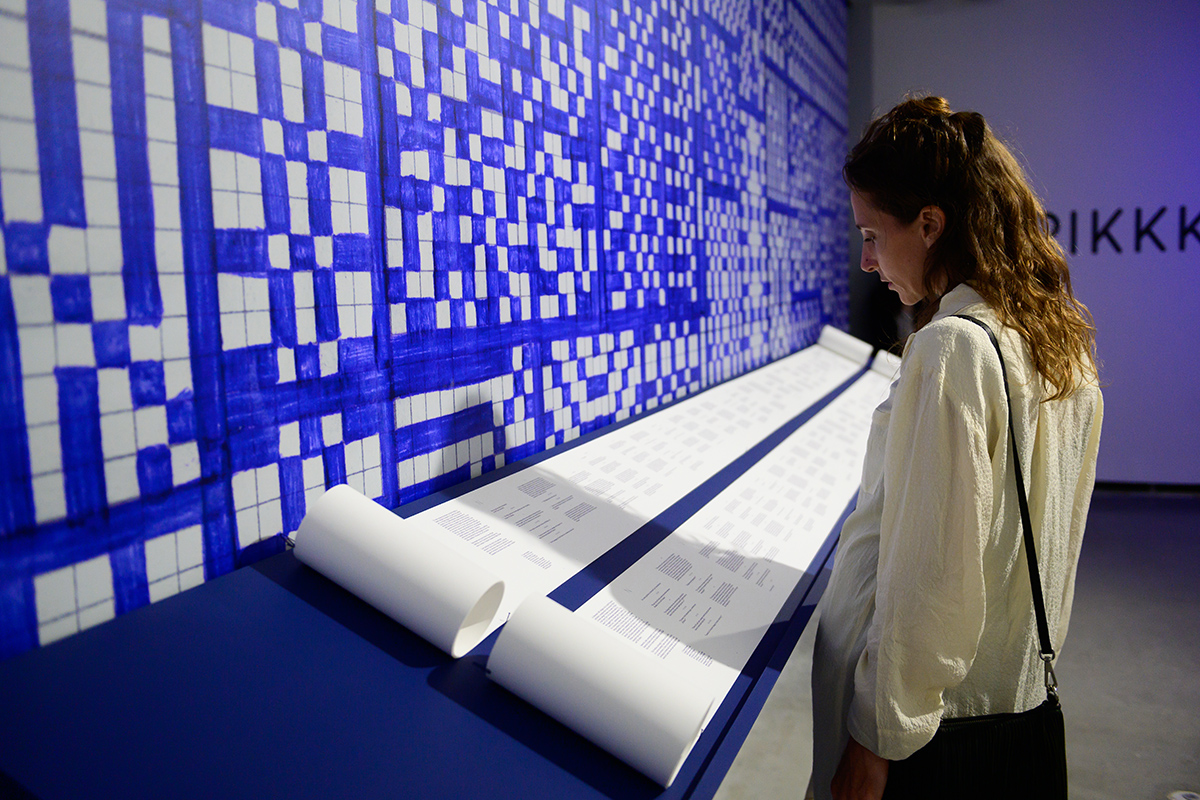 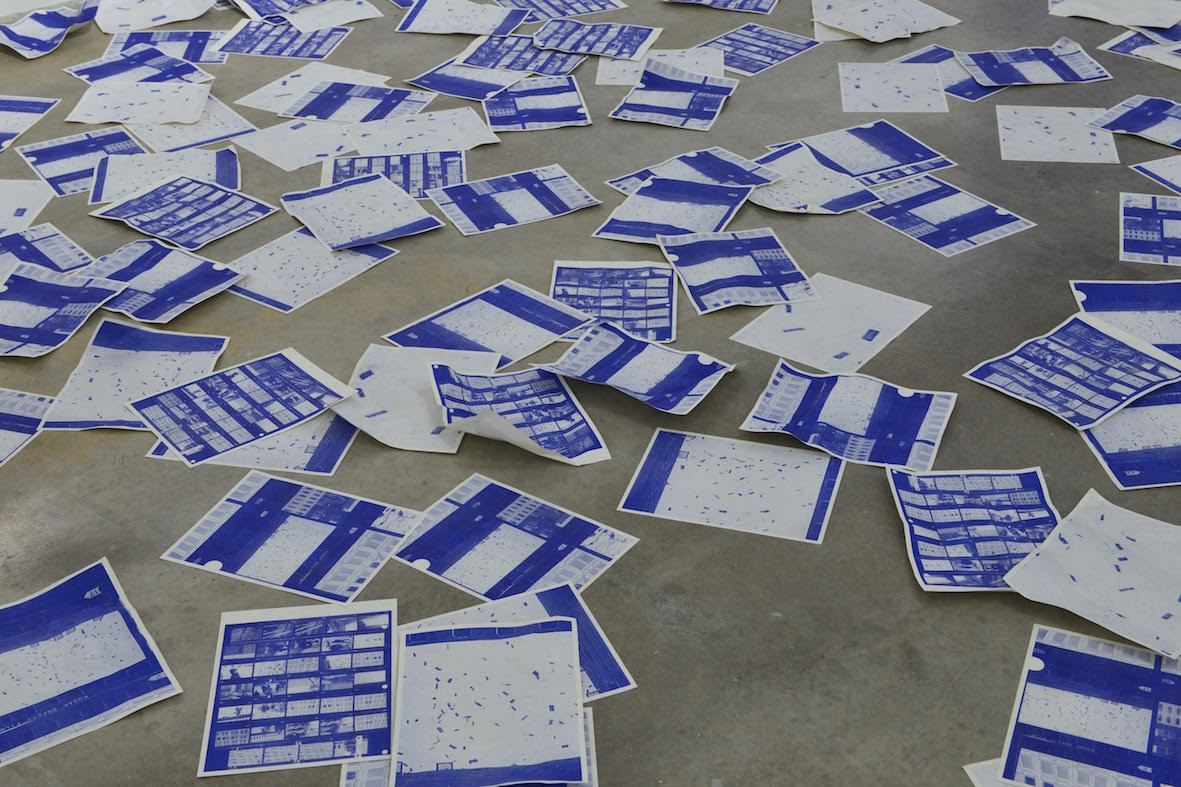 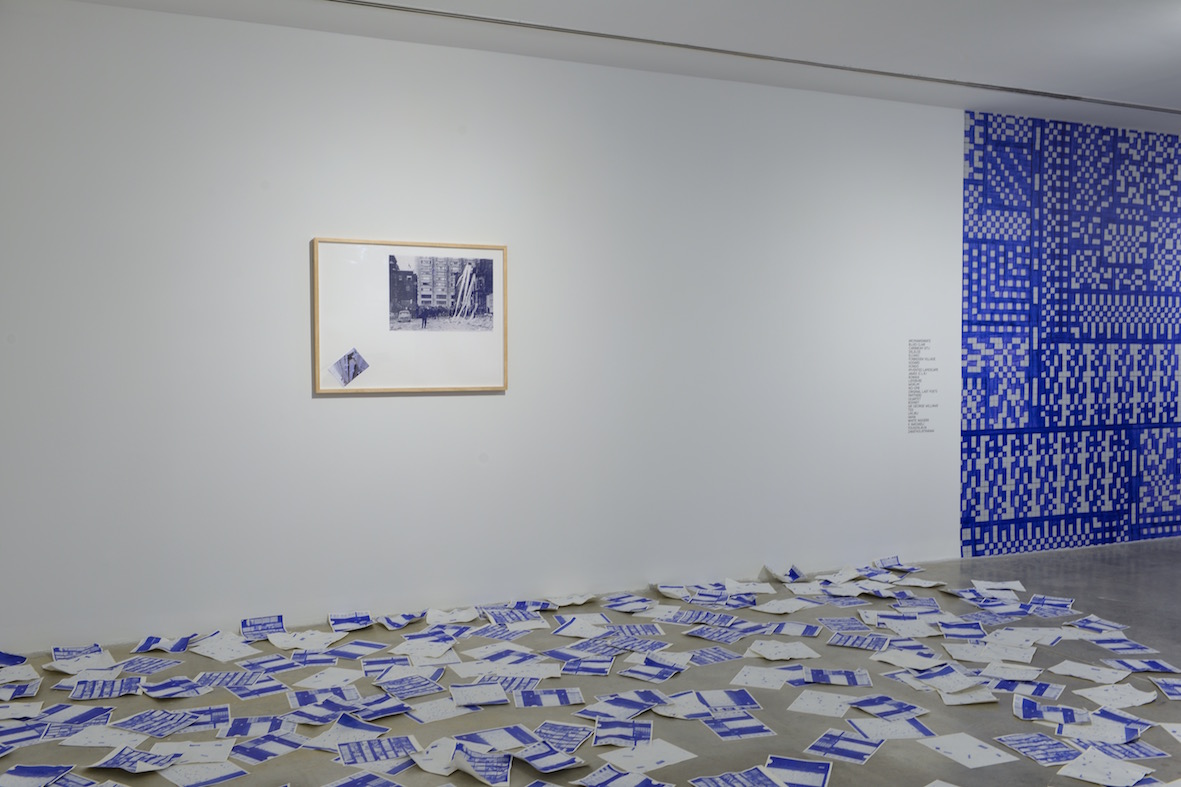 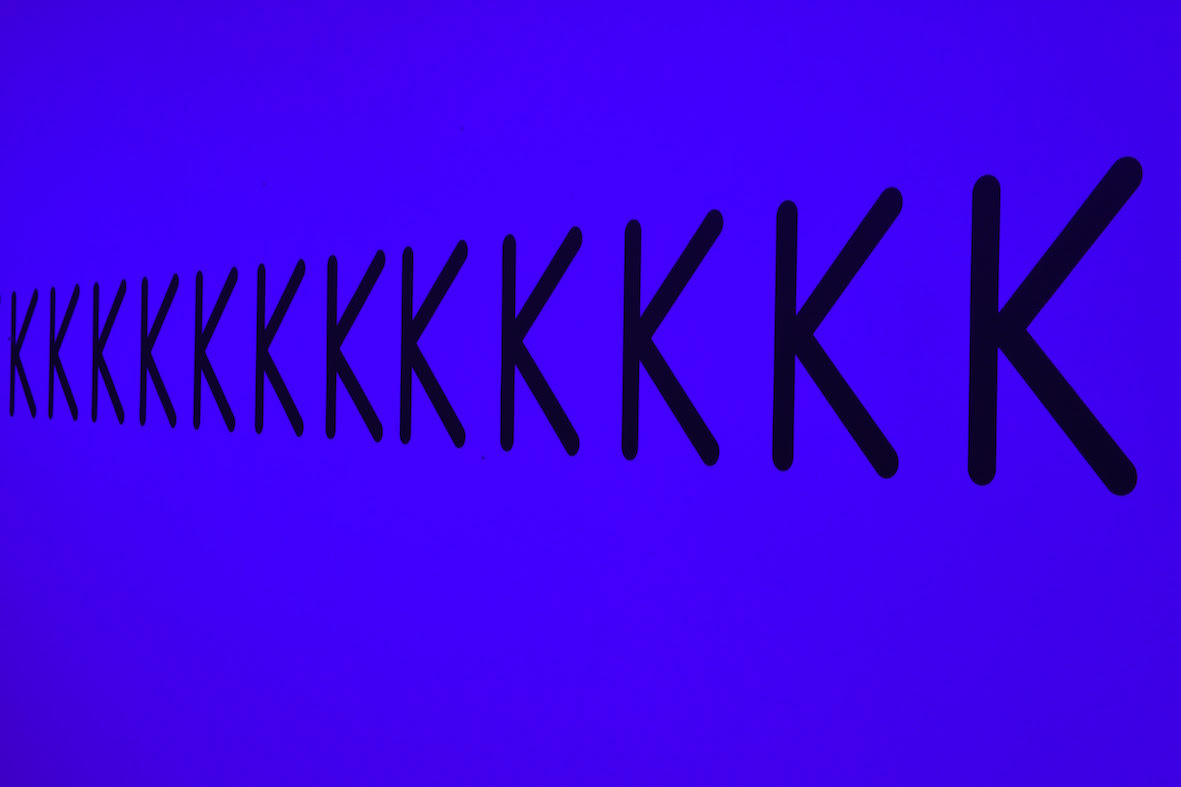 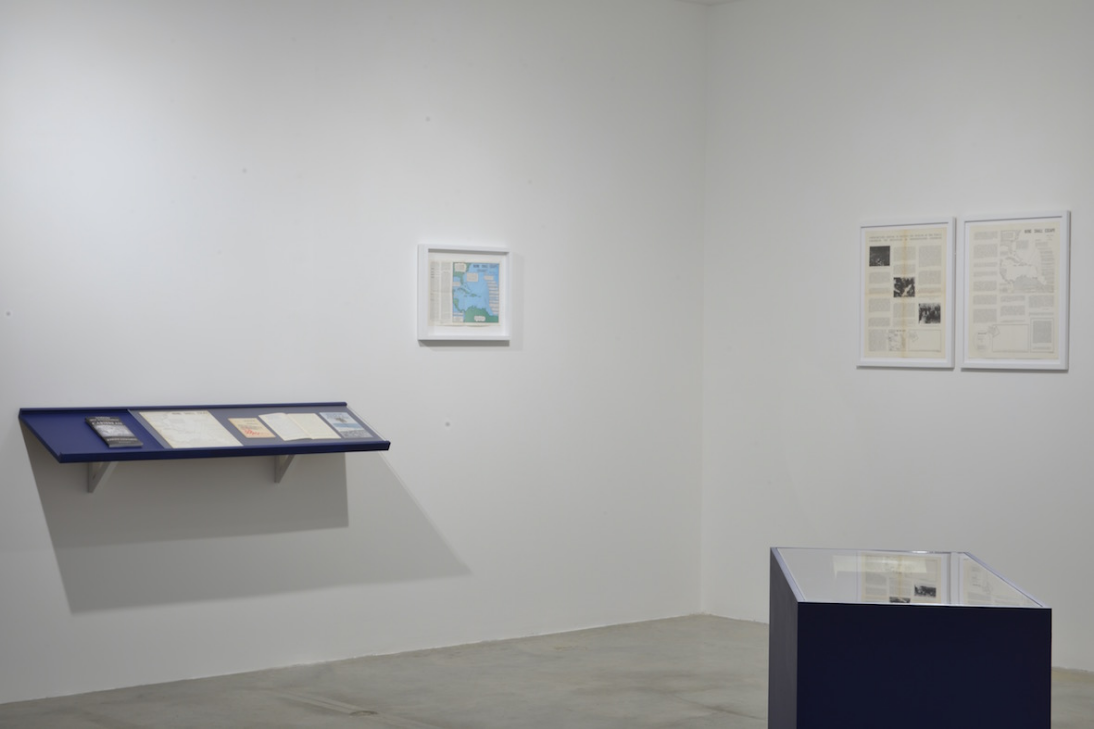 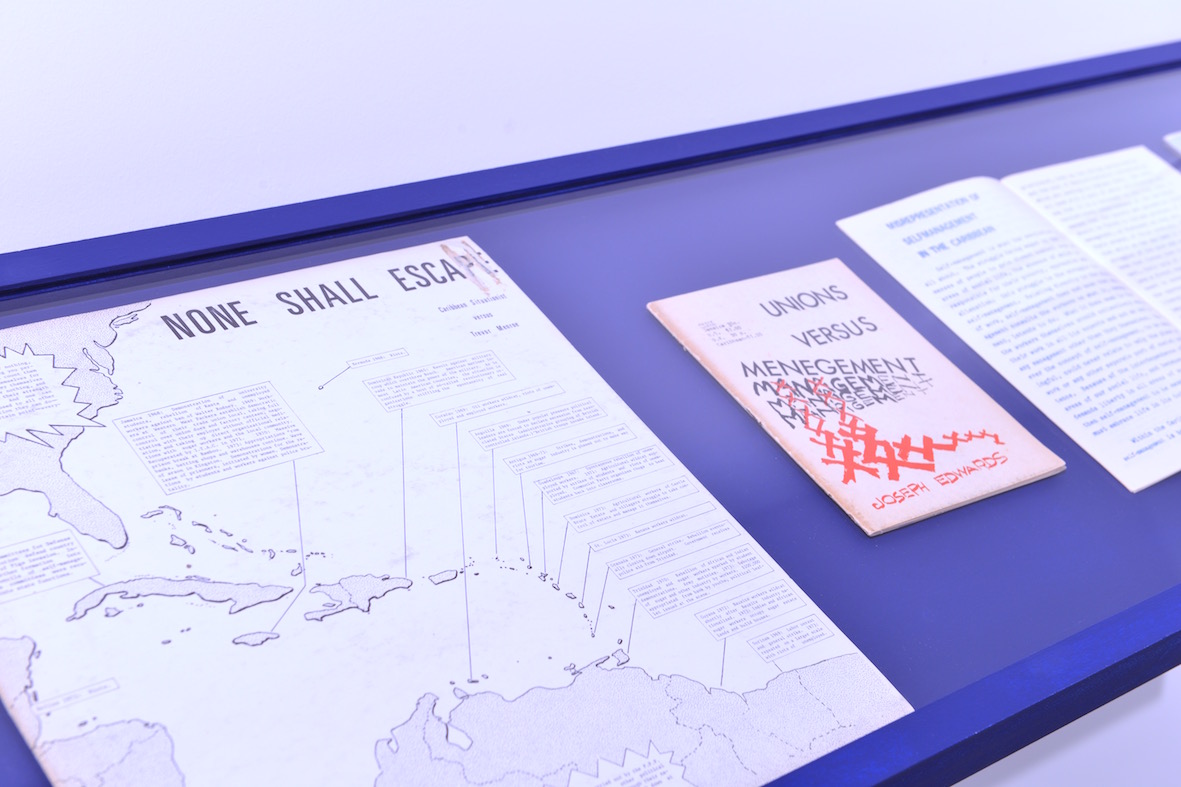 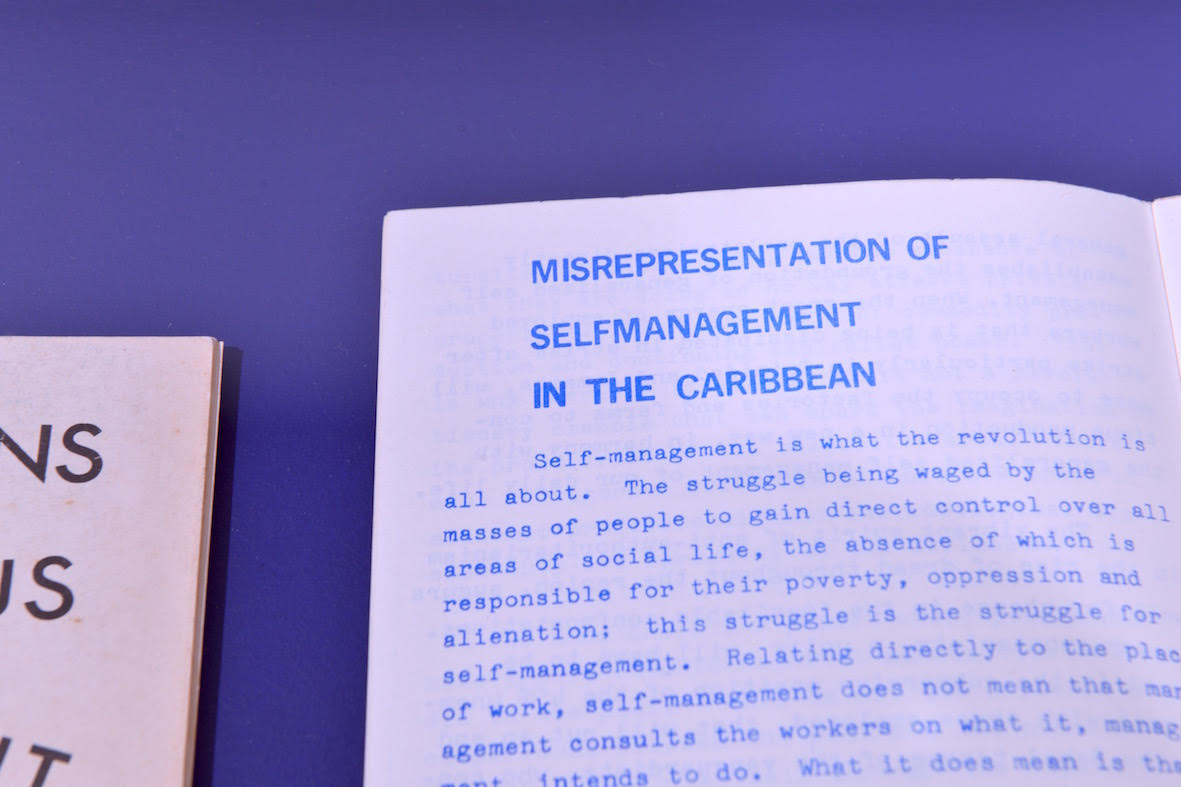 Solo exhibition by Vincent Meessen at The Power Plant, Toronto

For details, see below

Belgian artist Vincent Meessen often works collaboratively, drawing on the combined knowledge of collectives to conceive exhibitions and projects that investigate the construction of colonial modernity and its impact on contemporary experience.

Blues Klair is developed around the immersive film installation Ultramarine, which focuses on a mesmerizing spoken word performance of the self-exiled African-American poet Gylan Kain, whose performances in the late 1960s were a primary influence on the development of rap. Accompanying music is improvised by Belgian jazz drummer and percussionist Lander Gyselinck. In relation to notions of errantry, the blues of exile, belonging and the poetic power of the word, Meessen’s exhibition also excavates the archive of Patrick Straram, an exiled French Lettrist, jazz and film critic, who immigrated to Montreal in the mid 1950s. There, he maintained vigorous exchanges with figures of the French avant-garde and worked on his unfinished literary project “Blues Clair”. The exhibition links the emancipatory nature of these histories to the 1969 occupation of Sir George Williams University in Montreal (now Concordia University) by West Indian students, which marked the struggle for equality of Black and Caribbean people in Canada.

In the blue layered textile structure that frames Ultramarine and multiple references throughout, the colour blue is the chromatic, historical and discursive filter through which Blues Klair is experienced. It is an alternative way to read history through color, ultramarine referring all at once to a pigment, overseas territories, trade, colonial and slave routes.

21/09, 13h
Master Class: Vincent Meessen
Artist Members are invited to this unique opportunity to meet with Vincent Meessen for a facilitated critique of their artwork. Each participant will have up to 15 minutes to discuss up to 8 images and/or videos of recently completed artworks or from an ongoing series. After sharing personal insights about the intentions and progression of his own art-making, Meessen will lead a discussion with creative feedback and constructive criticism.

22/09, 18h
In Conversation: Vincent Meessen with David Austin
Vincent Meessen will discuss with David Austin, author of Dread Poetry and Freedom: Linton Kwesi Johnson and the Unfinished Revolution (Pluto, 2018), You Don’t Play with Revolution (AK Press, 2009), an edited collection of CLR James’ Montreal lectures and talks, Fear of a Black Nation: Race, Sex, and Security in 1960s Montreal (Between the Lines, 2013). David Austin was also the editor of Moving Against the System, The 1968 Congress of Black Writers and the Making of Global Consciousness (Pluto, 2018). He teaches in the Humanities, Philosophy, and Religion Department at John Abbott College, Montreal. In 2014, he was awarded the Casa de las Americas Prize.

29/09, 14h
Sunday Scene: DijahSB
DijahSB is a clever emcee whose rhymes are as witty as they are honest. She fuses candid lyrics with modern beats and infectious hooks, navigating different sounds with ease, from drum-heavy boom bap to dark, grungy rock. She has appeared on Sway in the Morning, BET’s Freestyle Friday reboot and, in 2018, on stage with Jay Electronica. DijahSB will discuss Vincent Meessen’s exhibition Blues Klair.

17/10, 19h
Film programme: Right On!
In conjunction with Vincent Meessen's exhibition Blues Klair, The Power Plant is pleased to present Right On! (1970), directed by Herbert Danska. Described by producer Woodie King as the “first ‘totally black film,” Right On! features the original Last Poets, including Gylan Kain and Felipe Luciano, performing their radical poems on the rooftops and streets of Manhattan. This is not a “studio” film—it is a street film for the people. The performances are sharp, urban, radical, and clearly the beginning of today’s street-cool hip-hop culture.

19/10, 19h
Performative Lecture: Kaie Kellough
The year 2019 marks a half century since the iconic Sir George Williams “affair”, during which students at what is now Concordia University in Montreal occupied the ninth floor of the Henry F. Hall Building in protest against racial bias in grading. Through their occupation, the students -- immigrants from the Caribbean, members of various black diasporas, and their allies -- denounced racist pedagogical practices and the administration’s dismissal of students’ concerns. On the final day of the occupation, police entered the building, assaulting and arresting nearly 100 people. The former student protestors never received an apology, and the events of the fourteen day student occupation remains a traumatic moment in Montreal history and represents a major instance of Black radical action in Canada.
During this event, Kaie Kellough, one of the organizers a conference held to commemorate the occupation, called Protests and Pedagogy, will discuss and respond to the lingering legacy of this moment and its renewed relevance in the context of Vincent Meessen’s exhibition Blues Klair.

01/12, 14h
Sunday Scene: Deanna Bowen
Deanna Bowen is a descendant of the Black Prairie pioneers of Amber Valley and Campsie, Alberta. She uses her family history as a central pivot in her auto-ethnographic interdisciplinary works. Her broader artistic practice examines historical writing and the ways in which artistic and technological advancements impact individual and collective authorship. She has received several awards including a 2016 Guggenheim Fellowship. Bowen will discuss Vincent Meessen’s exhibition Blues Klair.

Ultramarine was commissioned by Le Printemps de Septembre (Toulouse) for its 2018 edition, travelled to the Leonard & Bina Ellen Art Gallery, Concordia University, Montreal (2018-2019). It was produced by Jubilee (Brussels) in collaboration with the Leonard & Bina Ellen Art Gallery and The Power Plant with support from VAF (Flanders Audiovisual Fund), Vlaamse Gemeenschap and the Nouveau Musée National de Monaco.

Read more at The Power Plant