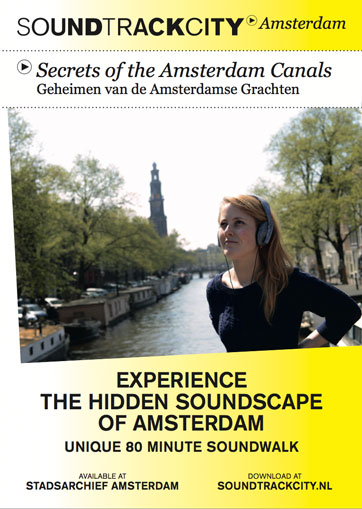 To celebrate the four hundredth anniversary of the Grachtengordel – the ring system of canals in Amsterdam, Soundtrackcity has designed a soundwalk around the stories that echo over the canals of the capital. The soundwalk has been made by sound artist Justin Bennett and theatre-maker Renate Zentschnig, with advice from Fred Feddes (author of A millennium of Amsterdam).

Secrets of the Amsterdam Canals weaves mysterious sounds from around and under the water with remarkable eye-witness-reports of the inhabitants. You can hear recollections of ex-squatters from the infamous building De Groote Keyser, poetic observations on the Elm, the canal-tree par excellence, and critical comments on Amsterdam’s slave-trade past. An urban biologist shares surprising facts about the fauna and flora of the waterways and a writer sketches the future of the Grachtengordel.

This unique walk takes you on an 90 minute journey through past, present and future of the world famous piece of Amsterdam (UNESCO world heritage list) that is the Grachtengordel, from the City Archive on the Vijzelgracht to the Herenmarkt close to the Brouwersgracht. The tour brings together sound design, documentary reporting and your own fantasy to totally change your view of the canals of Amsterdam.

Because of limited places reservation is essential.

Secrets of the Amsterdam Canals can be downloaded here.

It is also available (with player and headphones) from the Amsterdam City Archive,