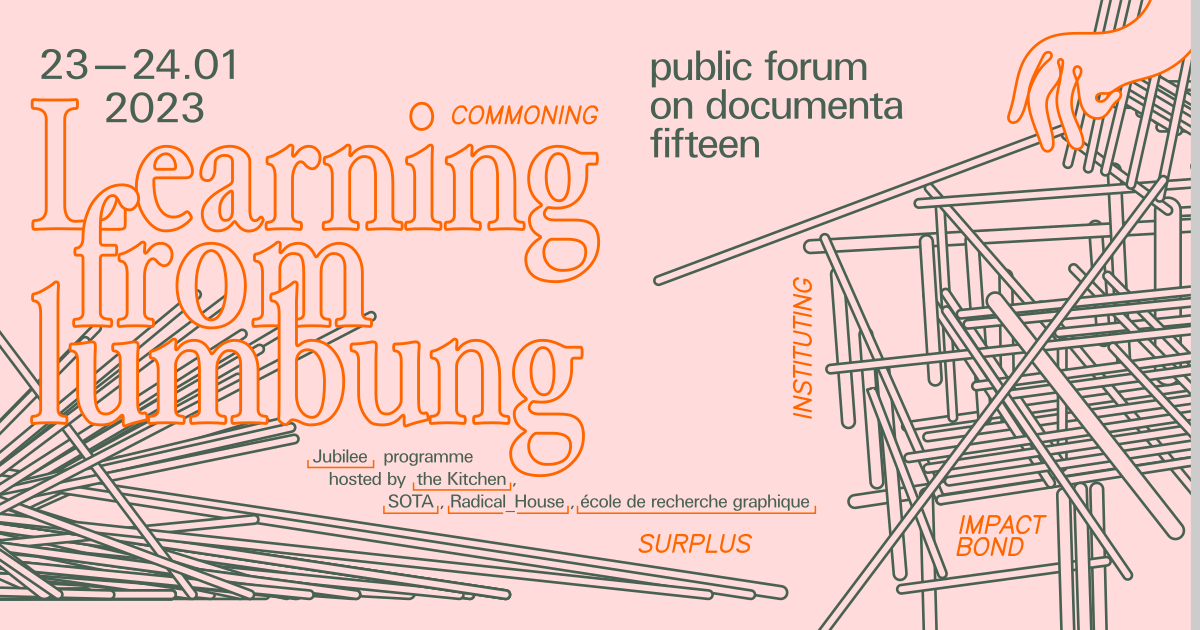 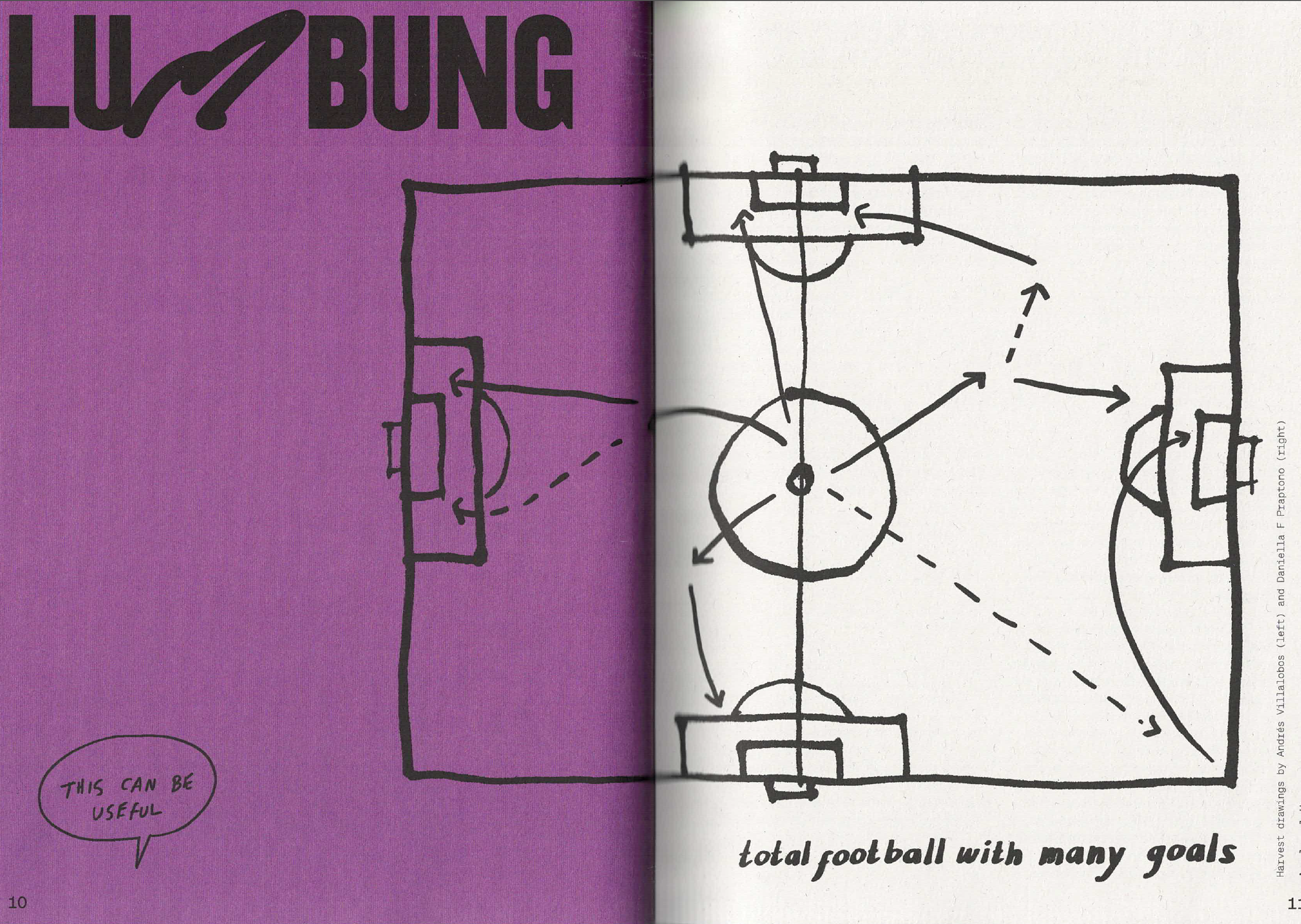 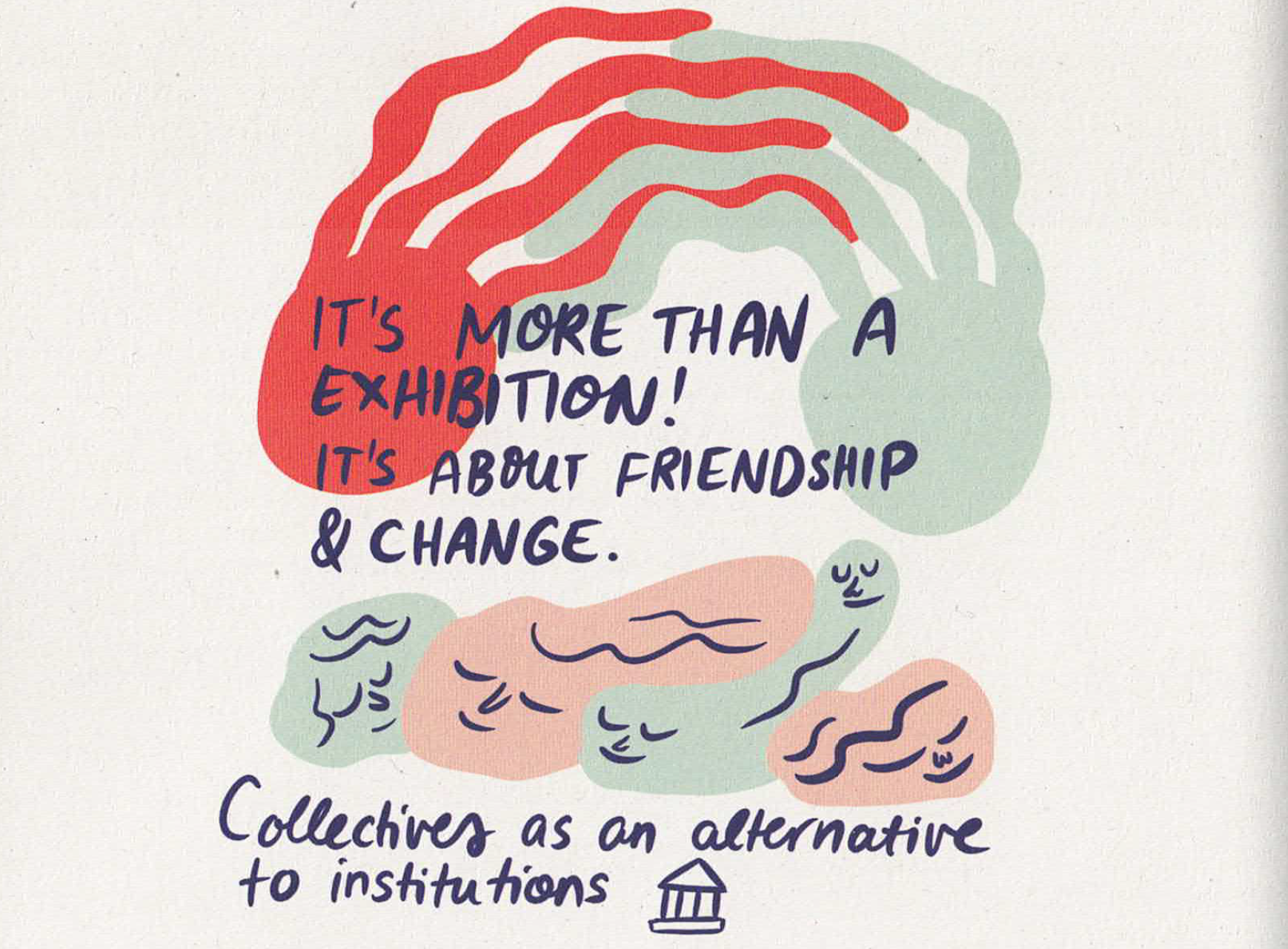 The Indonesian collective ruangrupa were the curators of the most recent edition of documenta fifteen. They gave a central place to collective artistic practices with special attention to participation, conversation, exchange and action, rather than internationally recognized individual artists who produce rather tradable objects. These practices, which come largely from the often underrepresented 'Global South', are characterized by a high degree of cooperation and trust - as a 'lumbung'.

Lumbung is an Indonesian concept. It refers to the surplus stock collected in a rice barn, intended for common use. ruangrupa did not use the concept as a metaphor, but tried to put lumbung into practice. In doing so, documenta fifteen questions the entire aesthetic and commercial apparatus of the Western art world, and thus the art paradigm with which 'we' in the West – often against our will – work. Our tastes and values, inherited from European modernity, are exposed to more worldly concerns in Kassel. Does that mean the end of art as we have known it? Not necessarily, but it certainly opens up opportunities for discussion and critical friction.

This Forum is organised to help us understand and collectively reflect on the resource distribution system that ruangrupa has set up, its limitations and emancipatory features. The presence of collective art practices in the highly visible context of documenta fifteen, in addition to questions of collaborative work and self-organization, touches the heart of the economy of the contemporary art system. The existing global system of the art world is confronted with profound questions about the institutional consensus that currently guides the modern art world.

The questions posed in Kassel are important for the entire arts landscape, and not just for the visual arts, let alone for a specific organization. Learning from lumbung is equally inspired by an interest in new ways of thinking about the arts, based on inclusive forms of ownership and a redistribution of value, that can form the fertile ground for the art landscape of tomorrow. In the current political-economic context and in the context of the new arts decree of the Flemish Community, questions about the distribution of resources and (self-)organization are only becoming more relevant for more and more artists. The actors in the Brussels art landscape are stakeholders and carriers of this conversation.

Jubilee organises this public reflection together with The Kitchen, State of the Arts (SOTA), radical_house and école de recherche graphique (ERG), three organisations that emanate collectivity and reflect on the place of the arts within society. Jubilee initiated Learning from lumbung from an interest that it has previously articulated through Caveat and Emptor, collective research trajectories reflecting and acting on the ecology of artistic practice.

How to share the practice of lumbung*?
Recording session of Kitchen Broadcast III
!RSVP, for reservations send an email to: thekitchenbxl@riseup.net

Iswanto Hartono is part of ruangrupa, the Indonesian collective that curated documenta fifteen. For documenta fifteen ruangrupa introduced lumbung as a practice, not only during but also leading up to and beyond the 100 days of the exhibition. After they were invited to be the Artistic Direction of documenta fifteen, the collective, in turn, invited documenta to be part of its ekosistem. The practice of lumbung enables an alternative economy of collectivity, shared resource building, and equitable distribution. It is anchored in the local and based on values such as humour, generosity, independence, transparency, sufficiency, and regeneration.

Subversive Film is a cinema research and production collective that aims to cast new light upon historic works related to Palestine and the region, to engender support for film preservation, and to investigate archival practices. Founded by Mohanad Yaqubi and Reem Shilleh in 2011, Subversive Film moves between Ramallah and Brussels, and was part of documenta fifteen.

This evening is hosted by the Kitchen. Kitchen Broadcast is an ongoing online conversation, listening to different voices, rhythms and sounds that reflect contemporary situations crossing their path in Brussels.

(*) lumbung is the Indonesian word for a communal rice-barn, where the surplus harvest is stored for the benefit of the community.

What can we learn from lumbung?

Katrien Reist is a Brussels-based art-worker and policy advisor to both individual artists and art organisations. She co-founded Jubilee in 2013. Katrien Reist moderates Learning from lumbung.

What do we need for lumbung and nongkrong?
Opening reflections

ruangrupa member Iswanto Hartonogoes in conversation with Jubilee artists and coordinator, and the audience present.

What are the realities of practicing lumbung in the arts?
Reinaart Vanhoe & Mariëlle Verdijk (ook_) in conversation with Katrien Reist
ook_ is an open platform without subsidies and without the need to succeed, initiated by reinaart vanhoe and Mariëlle Verdijk at their home in Rotterdam. For documenta fifteen, ook_ has collaboratively developed ook_visitorZentrum.

How can lumbung help dissolving boundaries between art and society?
Screening and conversation
In Between Blue Waves and Green Corridors started in 2018 as a workshop by artist Hans Van Houwelingen with students from the art academy in Arnhem, doing research on the decision of the municipality to demolish the iconic environmental artwork Blue Waves by artist Peter Struycken. It evolved into a two-year project by a team of young artists, who named themselves ArteZTeam, operating independently from their art school. They managed to have a crucial impact on the fate of the iconic artwork. Two of them, Jack Engelbrecht and Bram Kuypers will have a conversation with Van Houwelingen and Mihnea Mircan, a curator and writer. Mircan was the director of Extra City Kunsthal, Antwerpen (2011-15).

How can institutions host artists in different ways?
Melat Gebeyaw Nigussie and Ellen De Bin (artistic director and administor of Beursschouwburg) in conversation with Katrien Reist
Beursschouwburg is a multidisciplinary art center in Brussels. Focus of the conversation will be the experimental approach of their artist residency program, in context of which the organisation has set up a 'constellation' of partner institutions with whom they share resources and knowledge.

How could private and public partners adapt their roles?
Emily Rosamond in conversation with Vermeir & Heiermans
Emily Rosamond is Senior Lecturer in Visual Cultures at Goldsmiths, University of London, and Associate Editor at Finance and Society. Her recent research focuses on the financialization of reputation and personality in online platforms. Jubilee artists Vermeir & Heiremans research alternative economic models. Together, they speak about the Eco-Social & Art Impact Bond by INLAND, presented at the Ottoneum in documenta fifteen.

Lumbung as a form of resistance?
The Kitchen is extending the invitation made to them by Jubilee for a discussion of lumbung as a practice of solidarity against institutional violence, racism and different forms of censorship. Invited speakers are Noor Abed, Rachida Lamrabet and Michel Khleifi, moderated by Joachim Ben Yakoub.
Noor Abed is an artist and was part of the documenta fifteen team. Rachida Lamrabet is a writer and lawyer. Michel Khleifi is a film writer, director and producer. Joachim Ben Yakoub is a writer and researcher.
The Kitchen is a safehouse and a refuge for filmmakers, artists, and other cultural workers in and passing through Brussels, a meeting point for collaborative praxes.

Rodrigo Ghattas-Pérez is an artist, organizer, activist and restivist formerly based in Oslo, now in Lima. Ghattas received an indirect invitation to join documenta fifteen. We will discuss why he could not participate.

The Kitchen is a safehouse and a refuge for filmmakers, artists, and other cultural workers in and passing through Brussels, a meeting point for collaborative praxes.

State of the Arts (SOTA) is an open platform to reimagine the conditions that shape the art world today. It operates through the collaborative intelligence of independent artists and artworkers, but is open to all individuals and organisations that want to co-create a more fair and diverse cultural scene in Belgium.

radical_house is a long term project that stems from radical_hope's practices: it presents a physical place, a framework and a logic. Initiated in 2020 by Heike Langsdorf, radical_house is currently co-curated together with Simone Basani and Alice Ciresola.

école de recherche graphique (ERG) is a place of artistic, plastic and graphic practices that enter theoretical and formal risk zones. A place and pedagogies to define and redefine collectively. It is a place where you can learn from what is not working. A place of research, therefore.