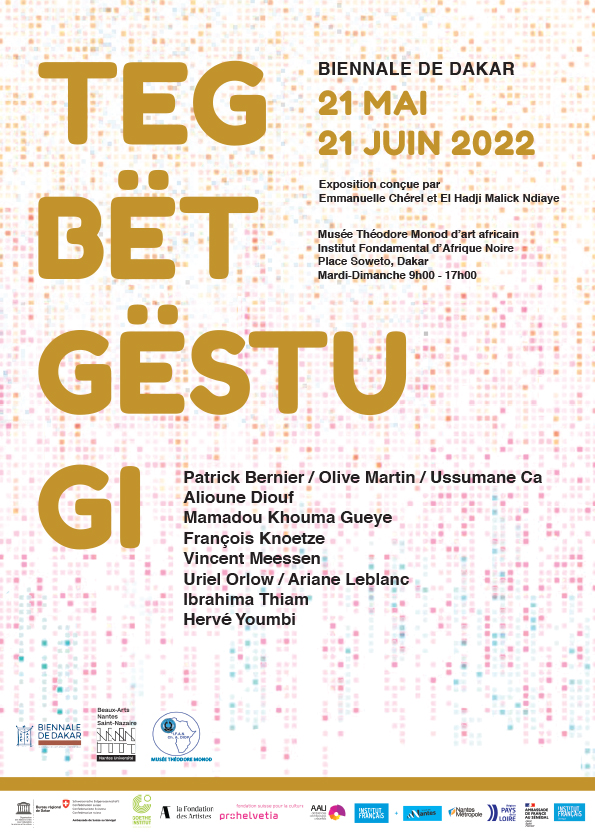 Teg Bët Gëstu Gi stirs up the metamorphic life of objects. The museum, a rhizomatic and living organism, affirms its potential for transformation, its contribution to metamorphosis, to metabolism, to new potentialities. A space for the production of forms, knowledge, new imaginations, speculations for the future - which re-examines its history, its methods, its scenographies, its uses, its role within the city - it brings out new proposals inviting to reflect on the future of communities. Cultivating vitalities and encounters, it focuses attention on births. Teg bët gëstu gi means 'to see', 'to touch with the eyes', or 'research'. Carried out – for the most part of them – during residencies, the works of invited contemporary artists (Hervé Youmbi, Ibrahima Thiam, Uriel Orlow, Alioune Diouf, Patrick Bernier/Olive Martin/Ousmane Ka, Vincent Meessen, François Knoetze, Mamadou Khouma Gueye) are combined with the historical collections of the Théodore Monod museum in African art from the Fundamental Institute of Black Africa at Cheikh Anta Diop University in Dakar.

Located on the edge of several worlds, histories and conflicts, these sensitive collections are today the object of renewed historical research and give rise to complex debates, particularly linked to their colonial past, they become cultural attractors around which stories are reconfigured. With their forms, their aesthetics, their devices, the contemporary works in the exhibition contribute to bear witness to the cultural and artistic richness of sub-Saharan Africa, challenge our relationship to African heritage – sometimes fragile but always alive, and in flux. Through processes of inquiry, hybridizations, connections, circulations, contaminations, imbrications, interdependencies, speculations, inseparations, tensions, frictions, they generate a series of questions within museum space or in the park. Installations, sculptures, videos, embroideries, photographs converse with objects and archives, reconsider ancient knowledge (botanical, medical, artisanal, aesthetic, linguistic, spiritual, mathematical, etc.),