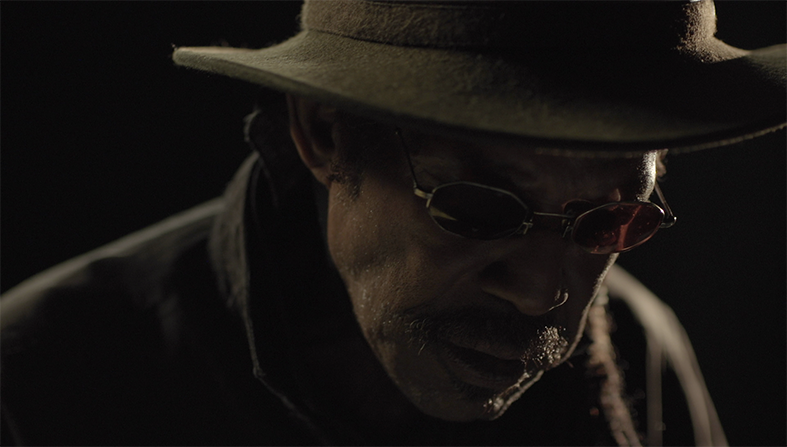 Originally planned to be taking place at Forum des images in Paris in 2020, the screenings have first taken place online, and in November 2021 finally on the large screen of Forum des Images, Paris. The event is organised by Documentaire sur grand écran. Ultramarine is accompanied by School of rap by Magazine Tracks (ARTE, 2021) and Ghost Song by Nicolas Peduzzi (2021).

Ultramarine, featuring African-American poet and hip-hop precursor Kain The Poet, offers a chromatic, historical and discursive filter for the story of its central figure. In considering the exile of the Black Arts Movement member to Amsterdam in the 1980s, Meessen’s video portrays museological objects in relation to Kain’s own belongings, while Kain delivers a radical spoken word performance accompanied by an improvisation by the Belgian percussionist Lander Gyselinck.

Ultramarine, referring to a deep blue pigment but also to overseas regions, is a visual poem constructed from locally chosen historical objects and a sort of a ​‘narrated exhibition’. This format creates the possibility of connecting Kain’s radical poetry to a larger frame of investigation: museum objects and artworks from very different origins, all stored in Toulouse museums and in collections of the Occitan region. Museum objects calling up colonialism – funeral figurines, world maps, textiles – are juxtaposed with Kain’s own props intoning his exile to Amsterdam in the 1980s. Disrupting the Eurocentric written logic of historiography as well as that of museum classifications, Ultramarine sets a constellation of objects moving and acting, enabling them to perform their possible agency.

Online programme (previously installed for covid reasons): Ultramarine by Vincent Meessen and The Last Poets - Made in Amerikkka by Claude Santiago. More information about the online screening programme on the website of the Forum des images and the Facebook event