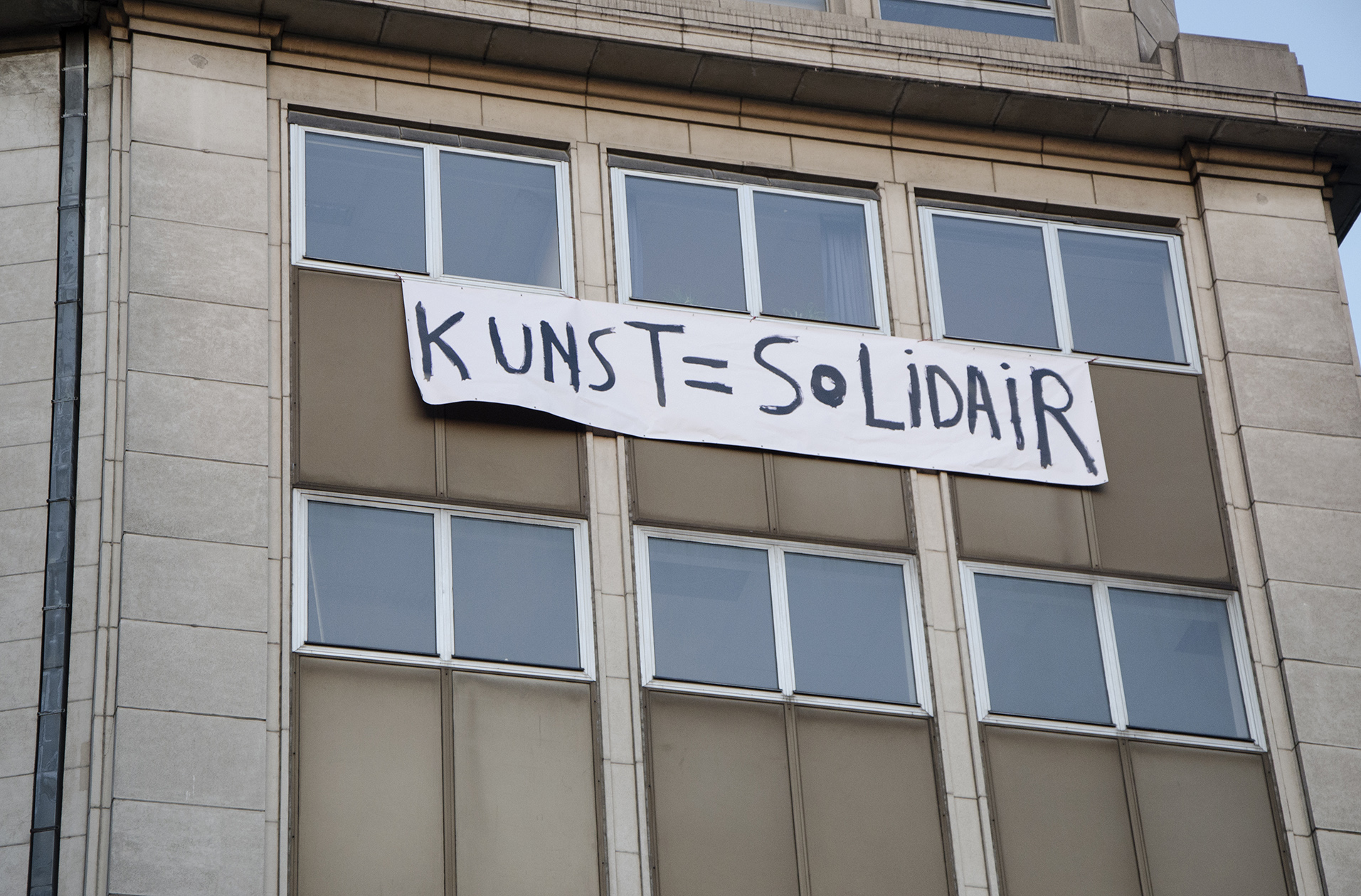 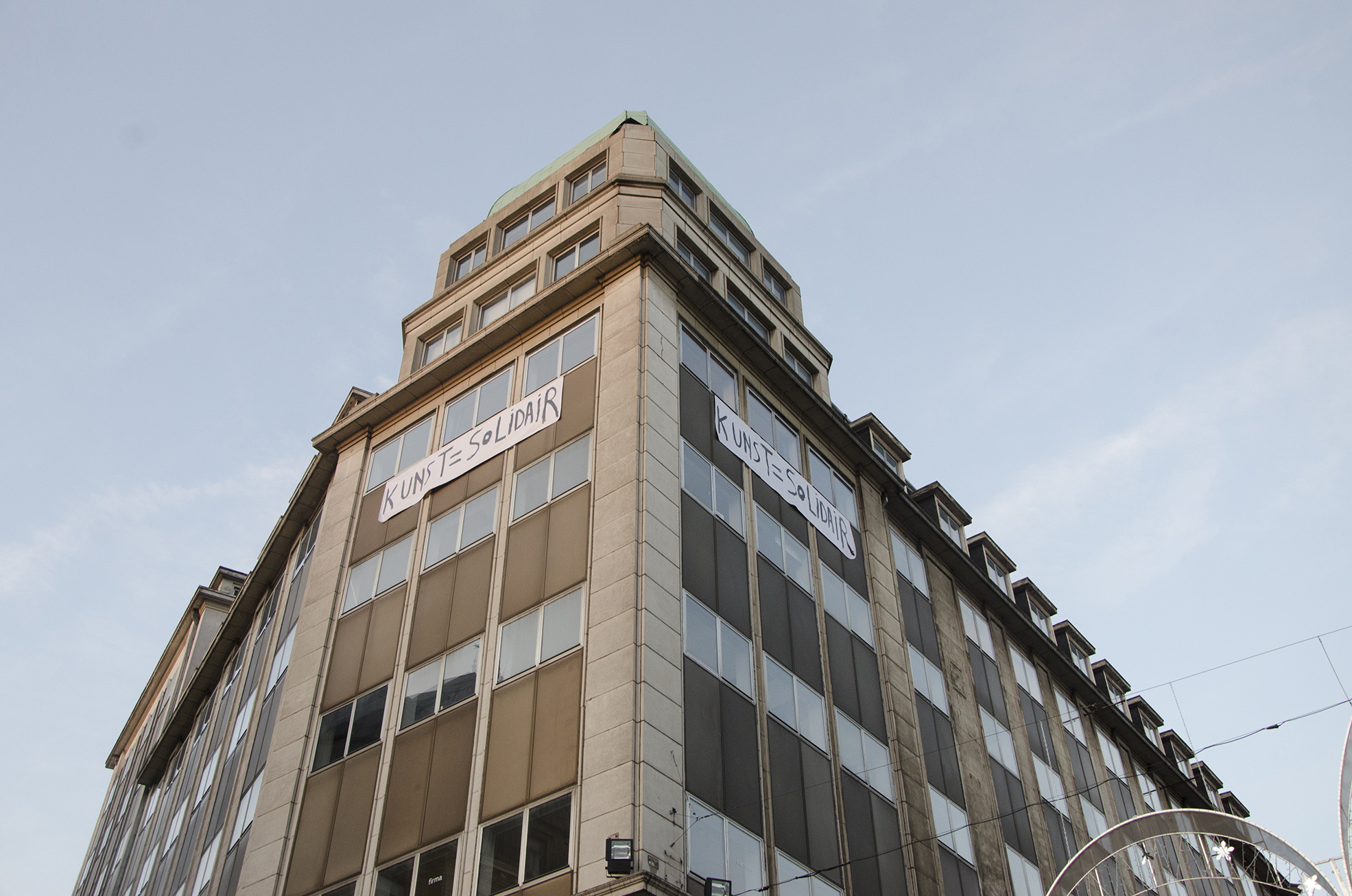 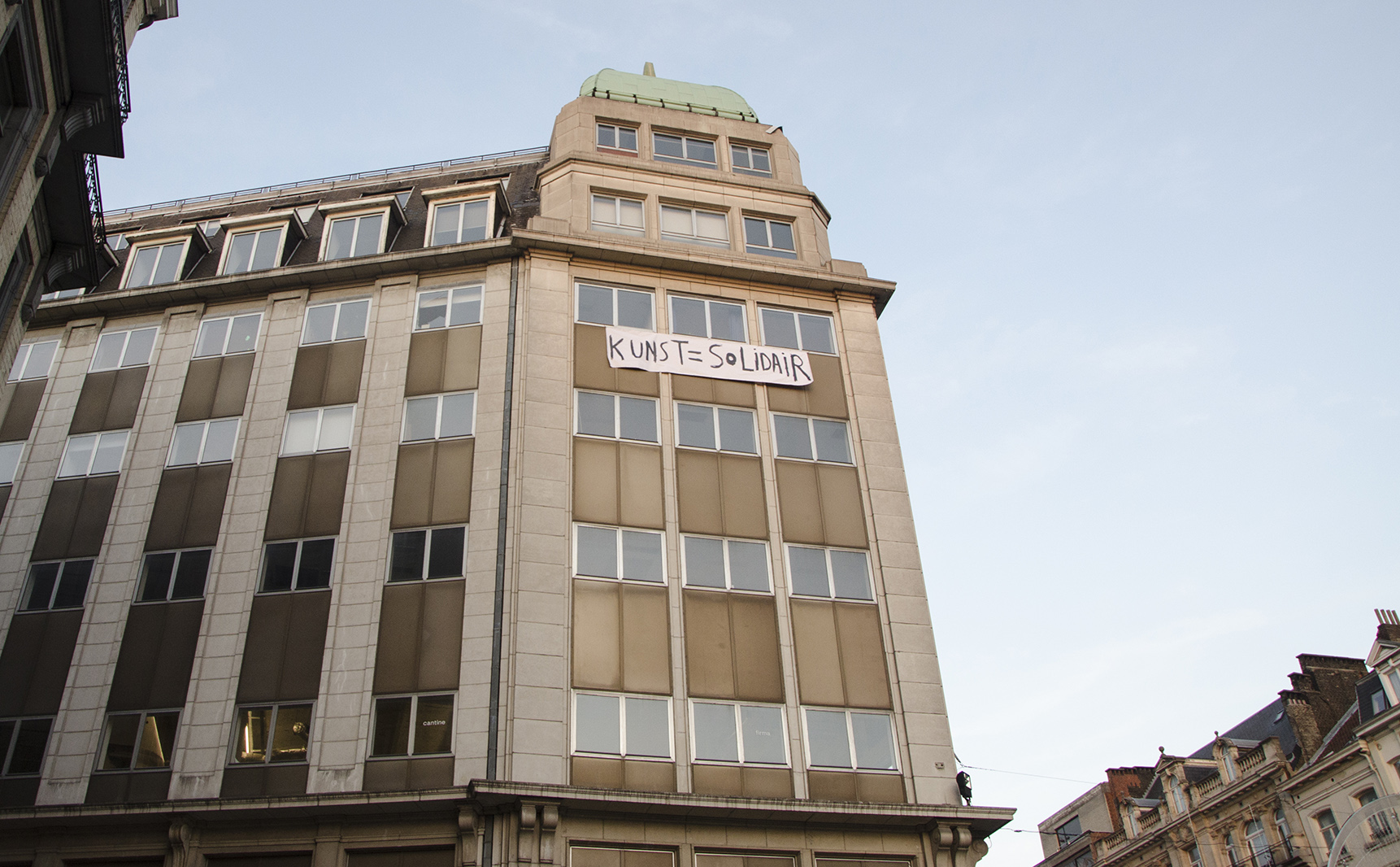 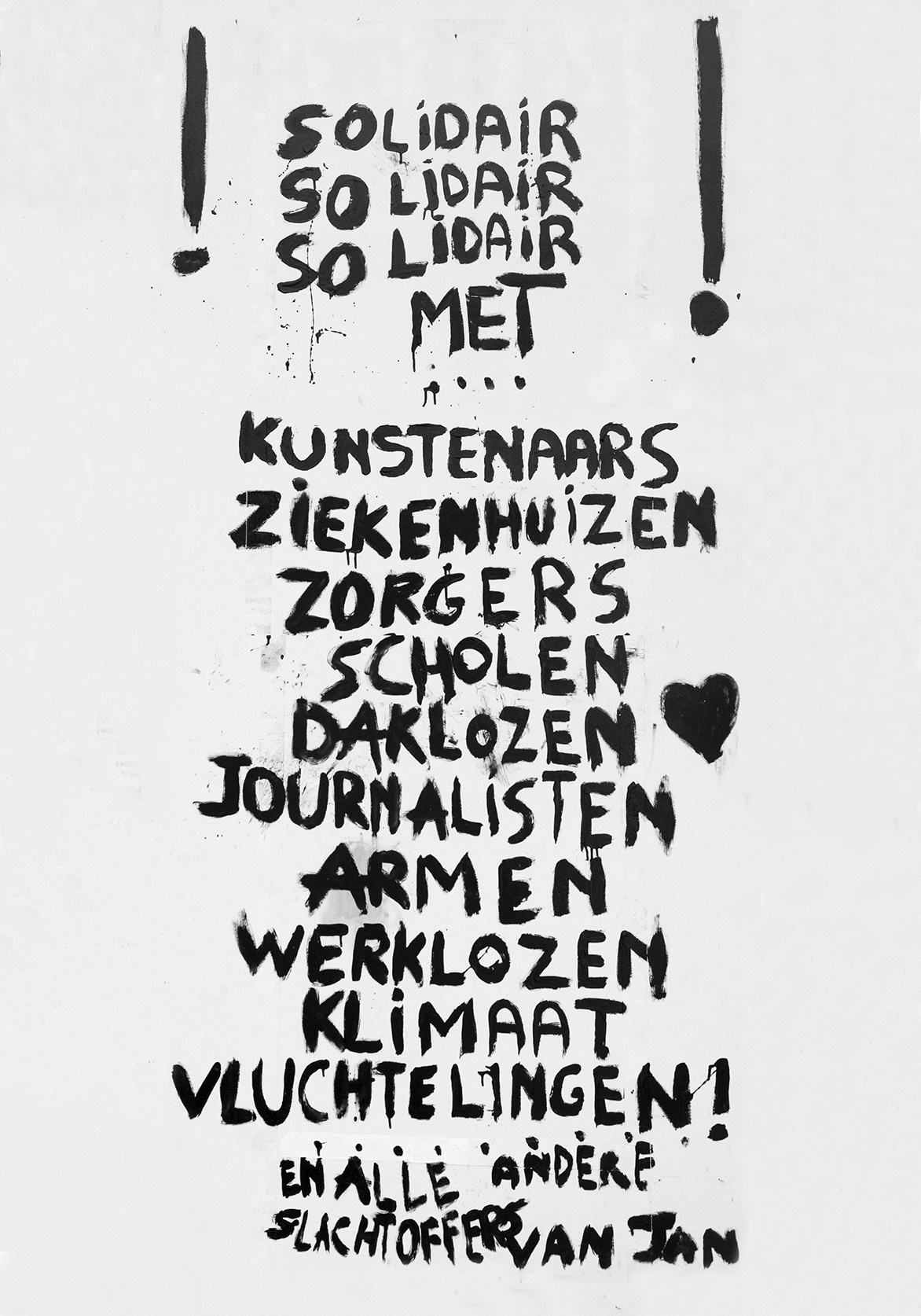 Jubilee's updated open letter, The arts and civic society threatened by the Flemish Government's austerity measures, as published on L'internationale

Since this letter was published, numerous public manifestations and many voices openly expressing their concerns have kept this issue on the agenda - and it seems like our efforts were not in vain.

On April 16th, 2020, Jan Jambon made the unexpected announcement to reverse the budget cuts for the cultural sector.

This means there will be a second round of project subsidies on May 15th, 2020.
The 4 million euro budget saved for this round is not an increase in funds, but a correction to the savings of 60% which brings the total budget for the projects to 8 million euro compared to the 8.4 million euro of last year.

We would like to inform you about the recent turmoil within the cultural and social landscape in Flanders. Our new Flemish government (we don't have a federal government in Belgium yet!) has announced severe austerity measures. This new government is a combination of N-VA (Flemish nationalist party), Open VLD (liberal party) and CD&V (Christian democratic party). The extreme-right party Vlaams Belang won 23% of the votes in Flanders in the last elections in May, but after long talks with NVA they did not become part of the Flemish government. The other political parties objected to their participation. But in the hope to win back voters, the parties of the current coalition in government are implementing some of the Vlaams Belang programme in the new policy proposals as we speak. (The final budget vote is scheduled on 19/12/2019.)

We have been informing and reaching out to our international peers, as we see these developments not as an isolated Flemish phenomenon, but as something that is playing out in Europe and globally. We cannot stand by and stay silent.

These proposals, on the verge of being implemented, are also part of government practices that try to hollow out voices of the critical media, of academia, fundamental research, critical arts, vulnerable groups of people, asylum seekers, different ethnic groups, the unemployed etc. In context of these practices, some people felt emboldened to spread hate and even commit violent acts in our country...

In order to inform you about the current policy proposals we are presenting an overview in this letter.

Already in January 2020, a budget cut of 3% for bigger art institutions, 6% for all other art organisations and a 60% cut of the individual artist project funding (from 8,5 million to 3,5 million euro) has been proposed![1]

The total arts budget represents only 190 million euros. Some of the current political opposition parties are well aware that artists' and art workers' labour situation is very dire. In their programmes they call for the implementation of a Fair Practice Charter.
To give the full picture, the entire cultural sector (including arts, heritage, socio-cultural work,...) only represents 1,12% (a total of 517,7 million euro) of the total budget of the Flemish Government, reaching its lowest point in the past 20 years.[2]

But what we want to stress is that we are not concerned about the arts alone. This government is playing by the neo-liberal script to cut deep into the social fabric of society. The VRT (Flemish Radio and Television) loses 44 million euro and thus 250 jobs. Funds for independent journalism too will disappear.[3]

Next to that, 130 socio-cultural organisations need to cut 6% of their planned operations. This also applies to youth accommodation centres and children's rights organisations.
SAM, a mediator for general welfare work loses no less than 27%! Associations of ethno-cultural minorities were almost[4] barred from subsidies and cut in their current operations.[5]

Public transportation, such as De Lijn, suffer lack of investment. Healthcare is struggling with long, growing waiting lists. The climate ambition is too modest. The climate walks and climate school strikes have led to nothing. The proposed policies are hampering citizen associations instead of expanding them. The heart of society, the social fabric, is losing its oxygen. These policy choices will transform Flanders into a very cold society.

"Everyone has to cut expenses," is the mantra. But that is not entirely true.

This government is also 'investing'. In the arts, for example. Their project is an ideological one, it wishes to promote the 'Flemish Identity' and a 'Flemish Canon'. They plan to invest in the building and programming of a Museum for 'Flemish Culture and History', in the regeneration of the old American Theater (a residue of the 1958 World Exhibition) to implement a 'Flemish programme' (34 million euro), and in Bokrijk (open air museum of 14th to 19th century village buildings and crafts). Next to that they plan to subsidize private art foundations that can be part of a 'programme of ambassadors' to promote the 'Flemish Canon' and the Flemish Masters abroad (examples given are: Phoebus Foundation of Fernand Huts (CEO Katoennatie) and Axel Vervoordt (art dealer, collector, interior designer)).[6] Focussing mainly on buildings and on heritage to "make the Flemish culture excel and shine abroad", and cutting funds for contemporary artists is not, we think, a sustainable choice...

The Flemish Government will also 'invest' in big industries with a 'climate subsidy', offering support for high energy bills, so these companies can stay competitive and will not move abroad as a consequence. These subsidies will be tripled in 2020 (from 34 million to 93 million euro). Beneficiaries of the subsidies are multinationals like i.e. ExxonMobil, ArcelorMittal, BASF, Nyrstar.[7] Tax benefits and subsidies going to the pharmaceutical industries amount to 554 million euro every year.[8]

This is not a caricature. The numbers are all in black on white in government documents. These money transfers impoverish society. Tax justice in our country is in a degrading state of affairs.
The so-called notional interest, the tax-shift and a lower corporation tax have created holes in the income of the government, which it has to compensate elsewhere.[9]

An inquiry by the committee of the European Parliament concluded that Belgium is one of seven European countries that facilitate aggressive tax avoidance. They reported that the multinationals choosing to create a seat in Belgium only do so based on profit exemptions and, consequently, they are not very interested to employ more than a few people.[10]

Civil society is about people who find each other in networks. They are committed to what is valuable. They assist people that have difficulties finding their way in our complex society, increase inclusiveness towards ethnic minorities, they strive to improve public transport, support actions for cleaner air and the climate, create possibilities for critical voices within the arts, education and journalism... Without those associations, unions and other advocates, every citizen becomes an island that has to survive on its own when his or her rights are restricted. Our civil society associations take care of the well-being of the people in Flanders, both directly and indirectly. Their added value is priceless and precious. In the past decades, the social profit accounted for an above-average growth in economic added value, employment, and the impact on the rest of the economy in the form of positive externalities, next to its incalculable symbolic and human emancipatory values.

Of course, there is anger, disappointment, and frustration among professionals and volunteers, within culture, education, care, civil society organisations, and organisations working with asylum seekers, the homeless, and other vulnerable groups.
Of course we do not want to allow ourselves to be torn apart for a few crumbs within the turmoil of an ideological war, it is essential to show our solidarity with all people affected. Affected by funding cuts, but also by practices that position groups of people against each other. These words and practices instigate fear, division and even acts of violence, as the recent arson attack on a future asylum centre shows - an act that did not even generate a strong public condemnation by minister president Jan Jambon.[11]

If the government really wants to invest in a warm Flanders, it should throw its  disastrous plans for civil society, public services and the cultural sector in the dustbin, and go back to the drawing table...This government should address inequality instead, and create policies that increase fairness, inclusivity, and protect vulnerable people and the climate.[12]

Dear friends and colleagues, if you see any way of supporting our (common) cause that would be very much appreciated by a lot of people...

Jubilee engages in SOTA (State of the Arts). SOTA is an open, artist-run platform including autonomous group initiatives as well as anyone worried about the state of the arts today.

You can find an open letter (English) written by 13 international curators and directors here: http://www.lesateliersclaus.com/index.php/blog/open-letter-de-standaard-today

Read the open letter on the website of L'internationale

Billboard made by artists for the protests of the cultural sector in Brussels. Photo: Karolien Chromiak
1 / 5
x