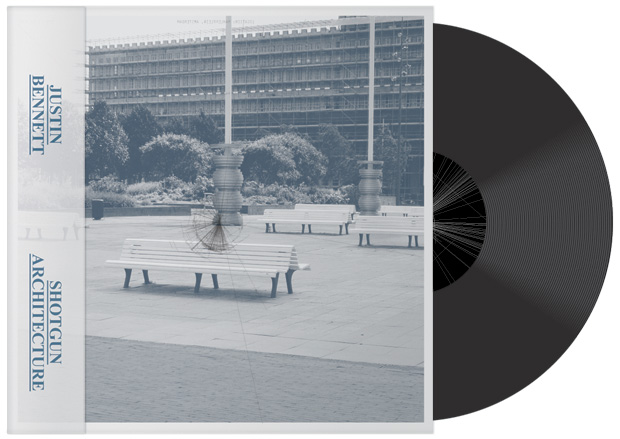 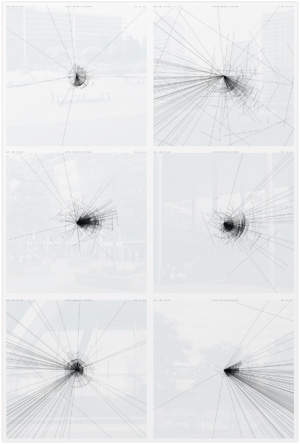 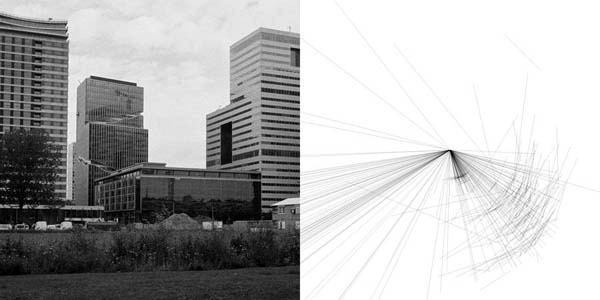 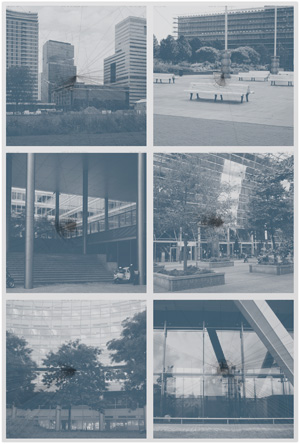 Sound installation by Justin Bennett, played through a parabolic loudspeaker at Kunsthall 3.14, Bergen (NO)

Justin Bennett's Shotgun Architecture (2008) plays with concepts of subjective measurement, translations between sound and image, and above all, the idea of the publicness of public space.

The recorded sound of a pistol shot in a number of semi-public open spaces in the Zuidas district in Amsterdam, thus the acoustic signatures (the impulse responses) of each space, was used in two ways whilst developing Shotgun Architecture. The recordings were used to create a sound composition which explores the resonances of the chosen places by repeatedly recycling or “feeding back” the sounds of the gunshots through the spaces. The resulting piece moves between dramatic realism and an abstract composition reminiscent of the electronic music of the 1950’s.

The recordings were also used as a kind of sonar; the stereo (and therefore two-dimensional) sound data was analysed for spatial and spectral characteristics, plotted against each other resulting in an visual map of the acoustic space. These maps, drawn by a computer program, resemble the visual spaces themselves only in terms of scale: a larger, open space results in a wider pattern of lines. Because of the complexity of the acoustic reality of an urban space, the link between the physical plan of the space and the corresponding “sonar map” is very tenuous.

But still they tell us something about the space. The experience of listening to an urban soundscape is difficult to describe, in words or in notation. The maps suggest a way to describe the open-ness or closed-ness of spaces, the density of reflections and reverberation, the presence of strong resonances or mechanical drones.

Justin Bennett is an artist working with sound and visual media. The everyday sound of our urban surroundings at every level of detail is the focus of his work, in which he develops the reciprocity of music and architecture, sound and image. Recent work has focused on urban development and public space, resulting in sound, video and graphic works including drawn animation.

Shotgun Architecture on vinyl will be sold throughout the exhibition at Kunsthall 3.14.

Parabol is a collaboration between centre Kunsthall 3.14 (non-profit art institution, Bergen, Norway) and Lydgalleriet (non-commercial gallery for sound-based art practices, Bergen, Norway). Lydgalleriet selects the sound works that will be featured through their parabolic loudspeaker sited in 3.14's entrance hall. With a particular focus on special commissions and edits, the loudspeaker's adjacent location offers an ambience and approach corresponding with the simultaneous exhibition. Justin Bennett's Shotgun Architecture plays with concepts of subjective measurement, translations between sound and image, and above all, the idea of the publicness of public space.