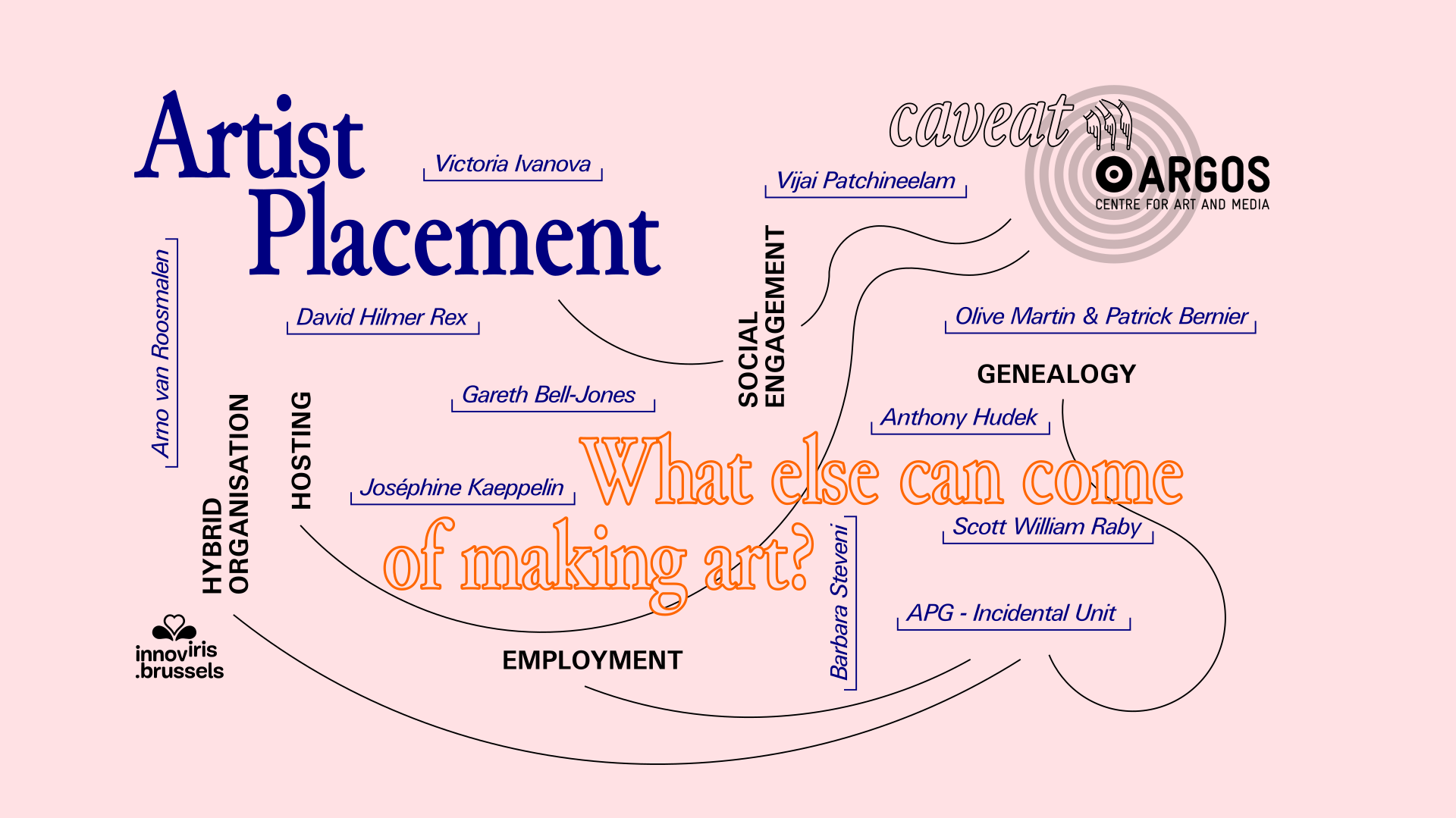 Artist Placement is a two-day series of presentations and discussions on the Artist Placement Group (APG), its ongoing relevance, and current projects and initiatives that taking inspiration from it.

Artist Placement is a Caveat programme that aims to address the current search for new organisational models, production schemes, and hybrid forms of organization in the art world. The programme takes as a starting point the Artist Placement Group (APG), a milestone in Conceptual Art in Britain, to address the resurgent interest in reinventing the means of making and disseminating art.

APG provided an important historical counter model anticipating many of the issues facing cultural workers today, in terms of seeking different forms of patronage, repurposing and reutilising different spaces, and thinking of ways to reorganize the art world.

Between 1966 and the turn of the eighties, APG negotiated approximately fifteen placements for artists lasting from a few weeks to several years. First within industries (often large corporations such as British Steel) and later within UK government departments such as the Department of the Environment and the Scottish Office, APG arranged that artists could work to an ‘open brief’. Their placements were not required to produce tangible results, but the engagement itself could potentially benefit both host organisations as well as the artists in the long-term.

Today, there is a trend of artists reclaiming, or finding recuperative possibilities in practicing within, corporations and companies. Do these practices hold the promise of a transformative model for today's art world? Re-examining APG’s initial gesture, through looking at the present, is timely now.

Artist Placement offers a series of presentations and discussions that take inspiration from the Artist Placement Group (APG). With Gareth Bell-Jones, David Hilmer Rex, Antony Hudek, Victoria Ivanova, Josephine Kaeppelin, Olive Martin & Patrick Bernier, Vijai Patchineelam, Scott William Raby, Arno van Roosmalen, and Caveat ‘dramaturgs’ Steyn Bergs and Greg Nijs, the programme will address the past and present relevance of APG. Through the presentation of current projects and initiatives that were inspired by APG, such as Diakron, Social Sensibility, Incidental Unit, the programme equally aims to open up perspectives for future activities of Caveat.

12h – lunch – introduction on the event

13h – Antony Hudek is currently completing a book on Artist Placement Group, with Alex Sainsbury, and will introduce the history of APG. In 2012, together with Sainsbury and in consultation with Barbara Steveni, he curated the exhibition The Individual and the Organisation: Artist Placement Group 1966-79, at Raven Row, London. It was the first retrospective of the pioneering artists’ organisation conceived by Steveni in 1965 and established a year later by her and John Latham along with Barry Flanagan, David Hall, Anna Ridley and Jeffrey Shaw, among others.

13h30 – David Hilmer Rex will describe the practices of the Copenhagen-based artistic research platform Diakron and their key project Primer – which is currently located within Aquaporin – a water purification company headquartered in suburban Copenhagen. Primer is an experiment in artistic organization that conducts a number of transdisciplinary research activities, collaborations, events, and thematic exhibitions alongside the developing technology firm. Scott William Raby conducted the interview and will introduce it to the audience.
Moderated Q&A

16h – Olive Martin & Patrick Bernier (Caveat artists in residence) will speak about their inquiry into four kodachrome images they found at the CCP (Centre de Culture Populaire) in the industrial city of Saint-Nazaire in France. These images taken in the 1980s show shipyard workers sharing, in the framework of their company, their cultural backgrounds and primary know-how.
Moderated Q&A

19h – Gareth Bell-Jones, director of Flat Time House (London) will speak about The Incidental Unit. Formed after a series of 'incidental meetings' the Incidental Unit was initiated by Barbara Steveni, Neal White, Tina O'Connell, Gareth Bell-Jones and Marsha Bradfield in 2016-17. Sharing information about the Artist Placement Group (1966-89), as well as O+I (1989-2009), the meetings have one open agenda item; 'unfinished business'. The meeting structure evolved in intention and purpose to become the Incidental Unit, with the aim of reconnecting the rigorous approach of APG with wider concerns around the brief given to socially engaged art today. Barbara Steveni, co-founder of APG, will feature in a short film that will be screened.

10h – Vijai Patchineelam, artist, will speak about his work on developing a 'protocol' for art institutions to have an artist in the organisation without the usual agenda of having a show, working on a commission, or giving a talk, etc. Such an 'artist placement' would employ and pay an artist in that very capacity and as a constitutive part of the inner workings of the art institution. The institution’s operational logic would, in turn, be affected by this presence.
Moderated Q&A

11h – Victoria Ivanova, curator and writer, will discuss the art field's infrastructural composition. While infrastructure is the seemingly invisible backdrop to our daily grind, it has a tendency to make itself apparent at the point of dysfunction or in its conspicuous absence. This is certainly how art field actors tend to experience art infrastructure – yet, perhaps it is time to take infrastructure more seriously, particularly in a moment where the future of the art field is either being formulated in terms of dystopian visions and pivots, or is entirely cancelled. Ivanova will argue that working towards future art fields through infrastructural praxis offers a surprisingly optimistic and generative alternative.
Moderated Q&A

12h – Scott William Raby (Caveat artist in residence) will describe his engagement and forthcoming interactions with Social Sensibility – a research based artistic program began by artist Alessandro Rolandi situated inside a French pump manufacturing company located in Beijing and Paris. Raby’s interaction with Social Sensibility is part of a series of artistic projects he is involved with that seek to integrate artists and artistic practice within the broader (im)material legal, financial, and organizational infrastructures of capital in more sustainable, experimental, and ameliorative ways.
Moderated Q&A

14h – Arno van Roosmalen, director of Stroom Den Haag (The Hague), will discuss the organisation’s new institutional policy which will focus more on the artistic process rather than on the presentation of exhibitions. Van Roosmalen proposes new forms of mediation between artistic practice and society. One initiative, Close Companions, brings in four artists in the organisation. They will accompany staff members in their daily work, as an opportunity for ‘unlearning’ and institutional change.
Moderated Q&A